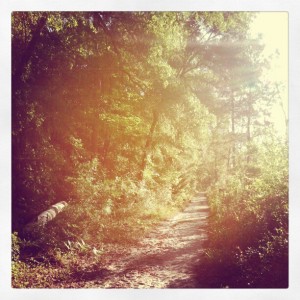 Can you picture a better place to run? Credit: kgseymour, Instagram

I’m a firm believer in the fact that nobody knows their town the way runners do. Sure, if you cycle or drive around, you’ll get a good lay of the land, but as a runner, I get to take trails that cut through areas that you’d never even know were there. I run through parks, neighborhoods and city blocks. I run around golf courses and through my old college campus. I’ve lived in Gainesville, Fla., for 12 years, and I’m still constantly finding new places to run.

In fact, just a couple of weeks ago I visited a local state park for the first time—kind of embarrassing, considering the trailhead is less than 10 miles from my front door. But, I joined a friend to help her on the last 10 miles of her 16-mile training run. I was a little nervous because, while I love being outdoors and being in the woods, I’m not a great trail runner. I’m clumsy and I have spectacularly floppy ankles, which means that not only do I trip, but I fall. Hard. Often.

This particular state park had a variety of loops in distances ranging from just a couple of miles to right around six. We kept a leisurely pace and did a couple of 5-mile loops, and I was struck by a couple of things. First, even though it took us a while to finish, the time absolutely flew. I don’t know how much of it had to do with the constantly changing scenery and how much was due to the ongoing conversation, but it was clear to me that this was an ideal way to get in long mileage, even if the terrain did present a few challenges.

Second, I realized I do not get enough nature in my life. I grew up in the country (as in three dirt roads to get to my house and no movie theater for 45 minutes in any direction), so I was always surrounded by nature. And, of course, I took it for granted. Sure, it was cool when the deer would come right into our yard, but it wasn’t something I thought was a big deal. On this run, without even trying, I saw rabbits, hawks, squirrels and an alligator. Well, I saw the alligator on the first loop, anyway. I couldn’t find him on the second loop, which may or may not have made me run a tiny bit faster through that particular area.

I admit it—I’m a little bit hooked on trail running. I’m still going to get plenty of road miles in because, well, I can actually go for speed (or, in my case, “speed“) when I’m not having to be on the lookout for roots and stumps in my path. But there’s no doubt I’ll be making more trips out to San Felasco (and maybe some of the other local trails I’ve heard about, too). Sometimes with my running shoes, and sometimes with a camera (and perhaps a dog or two) in hand.

Have you used running as an excuse to explore areas? Do you prefer running on roads or trails? —Kristen