We’re dedicating this entire week of posts to National Infertility Awareness Week, a nationwide campaign intended to educate the public about infertility and the concerns of the infertility community. So, let’s get to it—education on what not to say to anyone struggling with infertility. 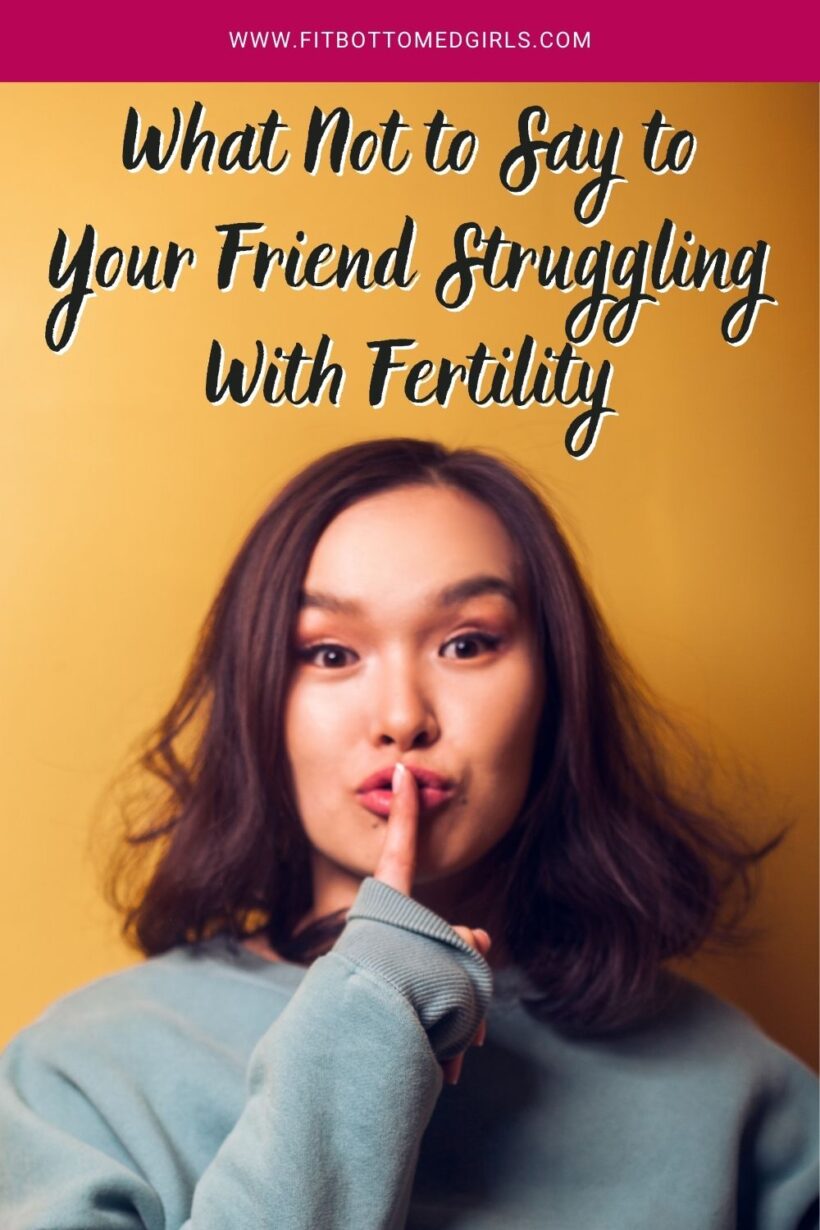 When I hear the word “etiquette,” I kind of cringe. To me that means always sitting up straight, using the correct fork for salad, sending thank you cards promptly and daintily blotting your mouth with a napkin after each careful sip of tea. That kind of etiquette just isn’t very me. But, when it comes to reproductive matters? Well, color me prim and proper—in that there are some things you should and shouldn’t say. Based on my personal experience, Tweets we’ve received and fabulous resources like this, we’ve put together a list of eight things that are best left unsaid when talking to someone who is dealing with infertility.

As someone who is dealing with infertility first hand, I’ve heard just about every single one of these—and I know they come from a good place (hell, I’ve even said some of them before)—but they’re really not very helpful. While hearing them once or twice is okay, hearing them from multiple people over multiple months becomes really frustrating. I know you’re just trying to be there for someone, so I’ve included a few better ideas to do just that after my rant. Because, despite the below, your infertile friend does appreciate your support!

8 Things Not to Say to Your Infertile Friend (or Co-Worker, or Sister…)

1. Don’t worry. It’ll happen. Actually, no one knows if it’ll happen. While it’s great for you to assume that it will, unless you’re psychic, you don’t know. And not worrying? It’s not like this a Bobby McFerrin song, people.

2. When are you going to have babies? Well-meaning people say this all the time, but without knowing a couple’s reproductive status, it’s a serious minefield. And even if you ask someone who can have kids, believe me, if they want to tell you about their reproductive plans, they will. Otherwise, it’s not your business.

3. Did you hear about (some long story about a woman miraculously conceiving)? Yes, it’s great about your neighbor who adopted a baby and automatically got pregnant after the doctors said she couldn’t or the cashier at the bank who stopped “trying” and got knocked up, but it’s really not making me feel better.

4. You can always adopt! Oh, really? I hadn’t thought of that. Thanks. (And side note: it’s not like adopting a kid is all kittens and rainbows. That process is long, difficult and expensive, as well.)

5. You should try _______. From eating sweet potatoes to special smoothies, teas and herbs, there’s no limit to what inexperienced and unqualified people will suggest. I know you want to help, but giving “advice” that’s better suited to growing a really good tomato in my garden is insulting to say the least.

6. Here, you can have my kids. Oh, really? Well, then problem solved! A variation on this is “You sure you want to have kids?” when pointing to kids doing something super annoying. To which the sarcastic answer is, “No. I’m just going through these infertility tests and treatments for fun.”

7. There are worse things that could happen. Not many. Each month you grieve a part of your life you want but can’t materialize. While I’m not saying there aren’t worse things, it’s an intensely challenging situation that has moments of big hopes and crushing disappointments. Unless you’ve been there, don’t try to put it in a hierarchy of All Terrible Things of Mankind. (And even if it’s not the most terrible thing ever, that still doesn’t mean that it doesn’t suck.)

8. Just relax. Oh, the mother of all sayings! Believe me, I’ve tried. And you saying that? Doesn’t make me want to chill out at all. It makes me want to punch you in the face.

A Few Other Pointers About Talking About Infertility

1. Don’t gossip. The reason why many are reluctant to talk about their journey is because a) they don’t want to hear the above, and b) they’re afraid others will judge them and talk behind their backs. And the same goes for comforting someone with the story of someone else’s fertility woes—having an open discussion is one thing; swapping horror stories is another.

2. Don’t ask them about it all the time. Yes, we’re dealing with infertility, but we’re also trying to live a somewhat normal happy life in the process. Checking in is one thing, but don’t dwell on it, and certainly don’t talk pregnancy and babies all the time.

3. Don’t complain about your pregnancy. I know the morning sickness is terrible and your ankles are swollen and you can’t sleep, but complain to someone else about it. And, yes, no matter how much all that sucks, I still want to have a baby.

So what’s left to do and say? Plenty. A note that you’re thinking of them, a shoulder to cry on and an open supportive ear go a long, long way. Bottom line? Nothing you can say or do can fix it or make things different, so ask them what they need—and respect their answer. And believe me, anyone going through this knows “if it’s meant to be, it will be.”

Anything you’d like to add to this list? Do so in the comments. I’m sure I forgot a few! —Jenn