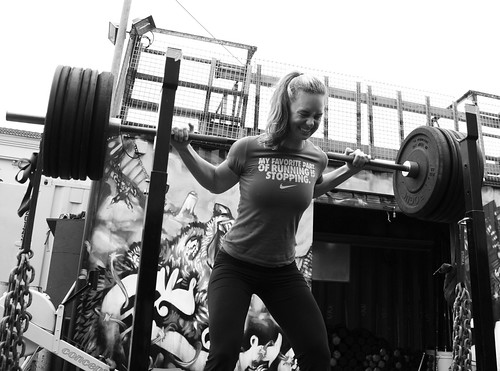 Last week I was in California, in the Bay Area, on a work retreat for one of my other gigs, and one morning, before our meetings started up, I went to a boot camp-type of class at FNS with one of my coworkers, Edita. She’d been going for a few weeks and absolutely loved it, and I couldn’t wait to give it a try.

Dude. It was hard. I hung in for as much as I could, but there were intervals where I just had to stop for 30 seconds and try to breathe again. Or try not to puke. Sometimes both.

It was also a real wake-up call for me. I thought I was doing so well with mixing things up, what with my trail running and such. But the fact of the matter is that I’ve seriously slacked in a couple of areas. Weights, for one. I might still have a lot of muscle, but it’s accustomed to running and swimming, generally for sustained periods of time. And, well, that’s different than doing eight to 12 squats three or four times.

Also, I’ve become a little wussy about pushing through the discomfort. I’m so fixed on making sure I can make it through a workout (a 6-mile run, an hour-long swim, a 90-minute yoga session, whatever) that I’ve been holding back. In this workout, I gave absolutely everything I had, and by the end of each 7-minute interval, I couldn’t possibly do another rep. Not for money, not for a donut. I was spent.

As we walked (or hobbled) out (after I used half a roll of paper towels to mop up the trail of sweat I left behind me), Edita mentioned that it took a couple of weeks of doing that workout consistently before she stopped feeling sore. I nodded (which was pretty much all I had the energy left for), thinking, yeah, sure, I know what I’m in for. I’ve been sore from workouts a million times.

Well, the workout was on Wednesday. I stopped groaning in agony upon sitting or standing on Saturday night. I stopped walking funny on Sunday.

Painful as the recovery was, it was also an awesome reminder that being in shape for one thing (running or triathlon, for example) doesn’t necessarily translate to fitness in other aspects. Next up, maybe I’ll have to take a trip to the Fit Pit with Jenn, but in the meantime, I have some work to do.

Do you mix up your workouts? Or do you just think you do, like me? —Kristen