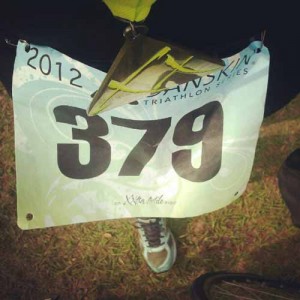 A medal and a bib. Not pictured: My big, giant smile. Credit: kgseymour, Instagram

My first tri of the season is in the bag. A couple of weeks ago, I participated in the Danskin Triathlon Series near Orlando (thanks to The XXtra Mile for sponsoring my registration!), and while my performance wasn’t anything to write home about (1:47:20 for a 1/2-mile swim, 12-mile bike and 3-mile run), this was one race where my personal performance was just about as far from the front of my mind as it could get.

The Danskin Tri Series is an all-women event, and it’s very strongly geared toward women who might not otherwise do a triathlon, in part because of the distances offered (Sprint, which is the distance listed above, and Super Sprint, 1/4-mile swim, 8-mile bike and 2-mile run), and partly because, from the very beginning, we were all strongly encouraged to help each other out.

Which, truly, is something that happens a lot in triathlon anyway—during one race where I was suffering from dehydration on the run, I lost track of how many people stopped as they went by me to make sure I was alright and didn’t need help, and I’ve never competed in a tri where fellow participants didn’t cheer each other on at turnaround points and as they passed each other.

The Race Starts; So Do the Tears

Anyway, let me set the scene for you. It’s 7:20 a.m. I’ve been up since 3:30 (I drove down the morning of the race, and check-in can take a while), and while my wave doesn’t get in the water until sometime after 7:45, the first wave of physically challenged athletes began at 7:15. Following them are waves of women racing the Super Sprint distance, and suddenly, the lake is filled with women of all ages. Some of them have overcome breast cancer, divorce, the loss of a spouse, the loss of a child. Some are racing in honor of someone who cannot. And some are racing because, for the first time in their lives, they can.

I stood near the chute coming out of the water, ready to cheer loudly for these inspiring women as they left the water and headed toward transition. But I couldn’t. I was completely choked up; I couldn’t squeak out a sound. But I clapped. Oh, did I clap. I clapped until my hands hurt, and then, I clapped some more. And I tried not to cry.

As the clock ticked closer to my own start, I made my way down toward the water. I chatted with a couple of women who were newbies to the sport, and I did what I could to make them a little less nervous. And then, I saw the last woman in the Super Sprint leaving the water. She was surrounded by Swim Angels—women who had volunteered to swim with racers who were nervous in the water, offering swim noodles as needed. I don’t know her story, but I didn’t need to. She stood up, removed her goggles, and the tears just started flowing. Hers and mine, and most of the people around me.

The Emotions Don’t End With the Swim

Throughout the race, I was inspired over and over again. There was a woman with one leg on the bike, and considering how difficult I found the hills with two healthy legs, I can only imagine how tough she was to have completed the ride. I saw women my mother’s age, some wearing tutus, some surrounded by other women, some just plugging along.

While I’m always proud to be a triathlete, I was overcome with emotion at this particular race. There was pride at being involved in something that gave all these women a huge sense of accomplishment, but also an incredible amount of inspiration from all the women who had clearly overcome more than an early morning 90-minute drive to be there.

When people ask me why I do this, why I spend hours each week in the pool or on the bike or out running, I have a lot of answers, but if you really want to know why? Participate in or attend an event like this. You’ll get it. I promise. —Kristen