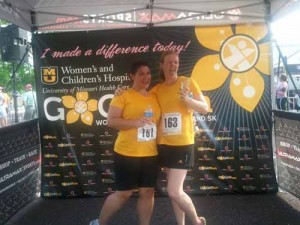 Dawn and I being goofy after the race. The 5kers got super-cute wine glasses as a finisher's prize. Loved it!

Before I get into my full recap of how the Go Girl Run 5K in Columbia, Mo., for MU Health Care went, let me go ahead and let the cat out of the bag: I did not meet my goal time of running it in less than 30 minutes. But now let’s get to what really matters: I seriously could not care less.

See, I hadn’t done a 5K in a looong time. In fact, this 5K was my first race since I walked last year’s half! (That seriously baffles me.) And that time away from racing made me both more appreciative of what training for and running an event is like, and it reinforced to me a concept that Kristen touched beautifully on last week: it’s not about ability or competitiveness; it’s about a community coming together.

And Go Girl Run was certainly a community event. Despite being in its first-annual year, Go Girl Run was the largest women’s-only event in the Midwest, consisting of both a 5K and a half marathon. While there were some seasoned runners out on the course, I was most taken with (and inspired by!) how many first-time 5Kers and half-marathoners were doing it. All shapes, ages, sizes and abilities were out there—in the high heat and high humidity—sweating and running their little hearts out. It was awesome. 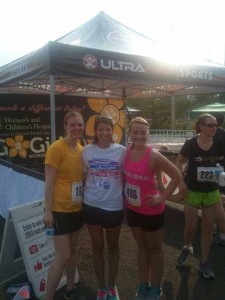 The 5K race began at 7:40 a.m. on the dot. The first half mile or so was a pretty brutal hill. Talk about warming up from the get-go! Once up and over it though, we had a nice bit of downhill action to recover and then got to run over a series of bridges and wooded (and mostly shaded, hooray!) trails until a turnaround point that was about two miles into the run. I know a lot of runners aren’t fans of turnaround points, and I get that. But what I personally love about them is that then you get to pass people face to face and cheer them on. And there was plenty of smiling and encouragement going on during this race.

At one point, I even spotted a runner with “FitFluential” on her back, and I stopped her to see what her blog was! Turns out she, @quepasadoc, was running for @annicanicole—talk about a small fit blogging world! From the turnaround, we ran back along the trail and across the bridges again to the finish line, which had a great chute that turned left—so as you came in you really felt like you were flying.

I had the privilege of running the 5K with Dawn from University of Missouri Health Care and, despite the heat and humidity, she was pushing it and left it all out there on the course. We probably started off a little fast and a high side cramp around mile one slowed me down a bit (HATE side stitches!), but all in all, I felt solid about our performance, especially with how hot it was. With an average pace of 10:53 and a total time of 33:44, the race was a blast, and I just enjoyed myself.

Sure I wanted to reach my running goal, but when all was said and done, I had a darn good time, felt good and loved watching a whole lot of first-time 5Kers do their thang. A HUGE thanks to Dawn and the University of Missouri Health Care for having me participate. I hope I get to do it again next year…

Have you ever set a race goal and not reached it? Did you care or just enjoy yourself? I’d love to hear about your race experiences! —Jenn