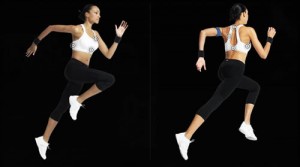 Fact: I do not want tube socks for breasts.

Fact: I do a lot of high impact activity—running, jumping, dancing, etc.

Fact: If I do not wear a good sports bra, I’ll be tucking my boobs into my belt before you know it.

Here’s the thing—I’m not particularly big busted, but there’s enough there to require real support. A sports bra that just squishes everything down doesn’t quite cut it, you know? So, when I was offered a chance to try a Shock Absorber sports bra, I jumped. Which only exacerbated my need for a good sports bra.

I received the Shock Absorber Running Bra, and first off, I noticed it had a couple of different places for adjustment. I always consider this a good sign because it means it’s truly designed to fit snugly—if the material is so stretchy that it will accommodate a range of sizes, that doesn’t bode well for your support. The fact that this was adjustable both at the band and in the straps had me feeling optimistic.

I was a little less optimistic when I put it on. It felt good and snug, but there were a few spots that felt like they might rub. But, I’m not one to tiptoe into a review, so this was a trial by fire. Well, by trail, anyway.

A 10-mile trail run came and went, and while many things were sore at the end of it—my ankles, my knees, my quads—my breasts felt fine. And that’s not normally the case after a long and bouncy escapade. Even better, there was absolutely no chafing. Zero. Zilch. Nada. This bra didn’t just do the job. It was total perfection.

The only downside? Well, I’ve had friends tell me that you get what you pay for in a sports bra, but I’ve always thought they were just trying to justify expensive purchases, or that it was only really necessary for bigger breasted women. Now, I’m a convert. At $79, this is not an inexpensive bra. Hell, I’ve paid less for entire outfits. But I can’t argue that it’s worth every penny. And so are my breasts.

Do you spend big money on sports bras? What’s your favorite bra, and why? —Kristen