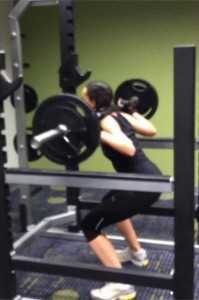 Yet I still squat!

For this edition of Question of the Week, each FBG is recounting her most embarrassing moment when it comes to working out. Buckle up…these should be fun!

Clumsy is my middle name. I trip on nothing at LEAST twice a week. In fact, I just tripped yesterday and went flying through the air like Superman on moonshine, so it’s pretty hard for me to get embarrassed now. I’m the queen of laughing at myself, but lucky for you all, I had a new oops that I’ve never done before that counts as probably the one thing that’s made me blush and want to rush to the locker room and never ever come out again.

It all started on a brave, sunny day in Los Angeles…

I had just lifted the heaviest I had ever done (squatted 145 pounds), so my trainer/boyfriend decided I should go up 10 more. He strapped five pounds to each side of my bar and off I went. I squatted 10 times. He told me to try for 15 reps. I was feeling gangster at that point and decided to squat even lower just to prove how very awesome I was—and that’s what it happened. I went lower and lower. Mr. Trainer started congratulating me for going lower…lower…and then I just kept going and BAM! The bar hit the safety and down on the floor I went.

It was THE most awkward and embarrassing move I’ve ever done. Didn’t help that all these dudes around me were watching the scrawny chick trying to lift the itty-bitty weights. I just about died. I can still remember how I went down—and how my head went, forehead first, ever-so-gracefully into the mirror in front of me.

The trainer tried his hardest to mask his snickers by asking if I was okay, but it was too late. My ego was bruised and broken. I have tooted in yoga AND while doing sit-ups…while someone was holding my feet. That stuff had nothing on the squat fiasco!

Some people have no shame in their clumsy game, but if you share a public gym moment I’d love to hear about it! —Tish