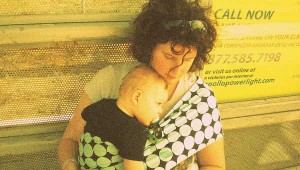 Attachment parenting isn't as controversial as the Time cover would have it seem. Credit: BobbiJanay @When did I go from a kid to a grown up

Unless you’ve been living under a rock, you have seen, heard about and have an opinion on the breastfeeding cover of Time magazine. My initial reaction when I saw the cover was that they were certainly looking to stir the pot. And stir they did.

The headline, “Are you Mom enough? Why attachment parenting drives some moms to extremes—and how Dr. Bill Sears became their guru” is a whole lot more controversial than the actual article about attachment parenting. What I found most interesting about the article was that it said mothers seem divided into several camps: 1) Those who fully commit to the attachment parenting model (which consists of breastfeeding, co-sleeping and babywearing), 2) Those who think it’s way too demanding or, say, have to return to work and can’t fully subscribe to AP, and 3) a third camp who are caught in the middle and find themselves “immobilized by their seeming parental inadequacy,” when they can’t do it all.

This, I get. In my days of pregnancy and early days of motherhood, I looked into the attachment parenting philosophy to figure out what it was all about. And to me, a lot of the tenets of attachment parenting make sense. In fact, the Dr. Sears site says that many parents use the approach instinctively. But to follow attachment parenting to a T is not just a little demanding of the mother, but HIGHLY demanding. And it can make those who don’t subscribe fully feel like we’re not measuring up. Not “mom enough.” Even though Dr. Sears’ site on attachment parenting says that it’s an approach, not hard fast rules, it’s still easy to feel like you’re not the best parent when you don’t implement it fully.

The thing about attachment parenting is that it’s not an all or nothing approach. The basic tenets of breastfeeding, co-sleeping and babywearing? They don’t make anyone a better or worse parent. Some women breastfeed, but want the baby to sleep in another room. Some formula feed but have a baby-carrying device for its convenience. There is a wide spectrum of “attachment parents” out there.

I breastfeed because I’ve had good luck with it, it’s easy for me (most of the time), it’s nutritious and it’s relatively free. I co-sleep because my kids have gone through spells in their early days where they wouldn’t sleep if it wasn’t next to me. So in order to be a better, more well-rested parent, I sleep next to my babies when it’s necessary for getting some shut-eye. (The snuggling is nice, too.) Babywearing? Sure, it’s great for snuggling and bonding, but seriously, sometimes the baby just wants to be held, I need my hands, and it’s the practical thing to do because it’s far easier to wear babies than it is to run back to the baby and soothe him every other minute while I’m trying to make dinner.

I’m not doing what I do as a parent to earn the title of “attachment parent.” I don’t win a prize because my baby only sleeps for long stretches when he’s next to me or because I absolutely can’t handle it when my babies cry and I go try to figure out what’s wrong (don’t most parents do that anyway?). I don’t win a parenting award because I wear my son on me because I’ve been too lazy and indecisive to buy a double stroller. (Any recommendations?)

I’m doing what I do as a parent because it comes naturally to me. I’m not failing because I use a stroller and I can’t physically wear two kids on my body. I’m not failing my kids because I own a crib where my daughter (usually) sleeps through the night and that serves as a safe place to put here when I so desperately need five minutes to shower. And I’m not a failure because the bassinet will retire when my son hits three months, and I will start trying to get him to sleep in his own crib down the hall. I’m not a failure because I have a swing and a bouncer, which serve as safe places to put my kids so that I can have a precious minute or two (sometimes it’s literally one single minute) to run and do some necessary chore.

When it comes to parenting, we need to put aside the competition. We’re all doing what we do because it works for us. Moms aren’t likely being “driven to extremes” to follow a particular philosophy. Moms are nursing 3-year-olds because it’s working for them, for whatever reason. Like the cover mom says, it might not be for everyone. And the beauty of it is, it doesn’t have to be. Because all parents are just trying to do what’s working for them and do the best we can for our kids. Period.

Do you think we should end the “mom competition,” too? —Erin