So less than a week after working out with Bob, I got to do another awesome thing: fly to New York City to learn more about Brooks Running and hang out with its amazing designers. (Note: FBG is an official Brooks Running Blog Ambassador and while they paid for the trip and are compensating us for some posts you’ll see in the coming weeks, in no way is today’s post sponsored. It’s just truly what I experienced and what I think!) I freakin’ love visiting NYC, so I was jazzed from the get-go. 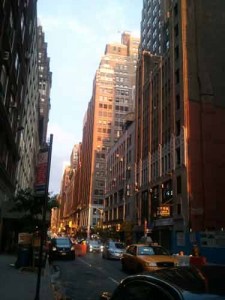 I kind of even like the honking in NYC…

Once settled in the city, I met up with two other fellow Brooks Running Blog Ambassadors—Meghann of Meals and Miles and Janae of The Hungry Runner Girl. They’re both awesome, sweet and hilarious. Oh, and they can run me under the table. Read their blogs. They rock.

Together we headed on over to a Brooks Running media event where we got to drink wine, discuss all things running—and take a couple of silly photos in the photo booth. There I met some more fab bloggers including Ashley from Black Girls Run and Theodora from Losing Weight in the City (and again, read their blogs—they’re awesome). 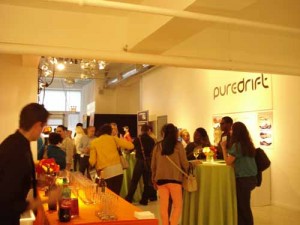 We chatted with designers about some of the Brooks Running apparel features and learned about how to stay safe when running at night (I’m sure we’ll have much more on that in the future!). 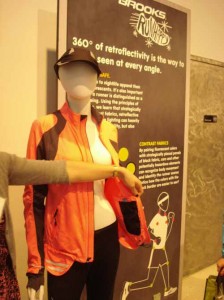 Check out this nice detail…a place to put your iPod or phone!

We also got a physical demonstration of the power of the Brooks Running shoes’ cushioning. When you hit this stuff hard, it was firm and supportive. But when you pushed it gently, it was squishy and cuddly. Does the same thing when you change how hard you strike when running! 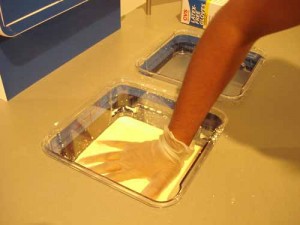 Who knew shoe foam could be so exciting?

And then there was the photo booth. So. Much. Fun. 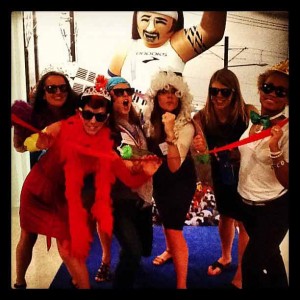 Never, never take your running or yourself too seriously.

Before heading out for the night, we got to load up a thumb drive with a few songs for a running playlist. For the record, they had “Fat Bottomed Girls” by Queen on there. You know I added that one for obvious reasons. 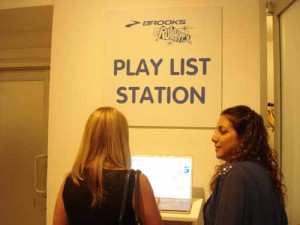 Good tunes can make or break a run.

After the event, we hit up a BBQ joint where I feasted on smoked chicken, bourbon sweet potatoes and collard greens. Um, hello, heaven. The next morning, I meet Janae and Meghann down in the hotel gym for a workout (I ran a bit and then did a CrossFit-style workout), showered and then we were off to learn more about Brooks Running.

For a few hours, we got the chance to sit down with the company’s footwear and apparel designers and ask all kinds of fun questions about what goes into naming a shoe (confession: it’s pretty random), what they think of the barefoot running trend (they haven’t seen a lot of science to fully support it), why they’re adding more holes to their women’s apparel (for ponytails and thumbs, of course!) and so much more. 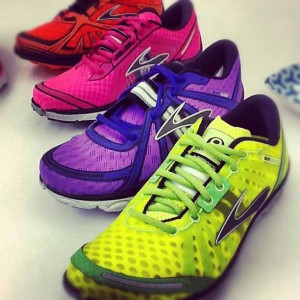 Described as minimalist shoes, the Pure line is as bright and fun as it is quality. I cannot wait to get my feet into a pair! 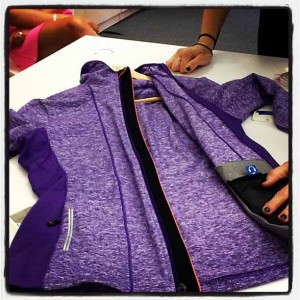 Of all the pieces I saw, this was the one that REALLY made my eyes light up. Heather purple with a spot for your iPod and your ponytail in the hood, it’s simply perfection.

Besides the fun colors and focus on runners (they only do running, so they’re like expert-experts!), what really struck me about the Brooks Running team was how passionate and excited they are about their products. So nice and willing to explain anything, they’re all runners who design only the best. And they are super-duper into it. It was SO fun talking to them and getting an inside scoop on the process behind all of the gear. Plus, isn’t this group good looking? 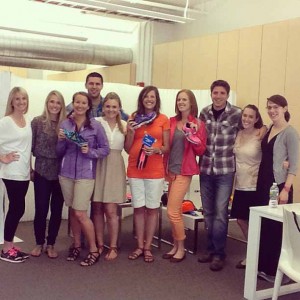 Had to do a group shot before heading out to the airport!

A quick trip to NYC but an awesome one. Stay tuned to our post tomorrow for our first Brooks Running review! And, tell me, have you ever thought about the level of thought and testing that goes into your running shoes and apparel? It’s truly amazing! —Jenn