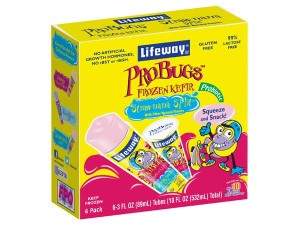 My toddler daughter doesn’t get sweet treats very often. I figure my kids have a lifetime of food temptations ahead of them, so I will do my darndest to make sure they’re eating as healthily as possible for as long as possible. But I was more than happy to share the Lifeway ProBugs Frozen Kefir Strawnana Split push-up pops when they landed on the doorstep.

I hadn’t even heard of kefir until Jenn tried out some of the company’s offerings. For those like me not in the know, it’s a frozen-yogurt type of concoction packed with protein, calcium and probiotic goodness. It has roughly half the calories of fro-yo, so it’s a lighter option if you’re someone who likes a treat often.

I’m not usually a frozen yogurt fan—I actually prefer the real ice cream shebang less frequently—but the ProBugs push-up pops were a huge hit with the whole family. My daughter loved the things and thought they were a special treat. The push-up container let her have fun with the food, although there was a bit of a learning curve getting a 21-month-old to push the food up and not have it be a totally melty mess by the end. (But heck, that was half of the fun!)

In a mere 70 calories, each pop manages to pack in 4 grams of protein and 10 percent of your daily calcium needs. More strawberry than banana-y, they were right up my ally. They’re a creamy sweet treat with a bit of tang that I felt comfortable giving my daughter as a midday snack on a warm day.

Have you tried kefir yet? Heck, had you even heard of it? —Erin