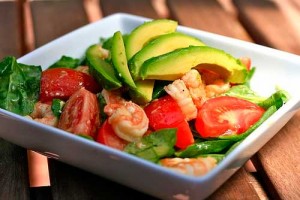 Some people focus on what you can’t have when eating Paleo. But I hone in on all of the awesomely delicious foods to enjoy. Credit: AmySelleck

As you ladies know, I’m always tweaking this or that in my diet to feel my absolute best. After going vegetarian for a month, I began eating meat again but committed to buying only the really good organic and grass-fed kind. I frequent a bison farm. We get eggs from my husband’s coworker who has chickens. We have our own garden. And I’m always down for trying new weird health foods.

Well, after my mom went gluten-free with her diet, I began to notice how I felt after eating gluten. While I didn’t have stomach pain like she would, I began to notice how my body felt better when I didn’t eat it. My face didn’t break out as badly. I didn’t feel bloated. My poop rocked. And my allergies improved, making me have less of that foggy brain feeling. So, in attempts to support my mom and feel better, I cut out most gluten from my diet. And, to tell you the truth, it wasn’t that hard because how I felt was really that much better. (Although, following the good ol’ all-good-things-in-moderation tagline, I did indulge and enjoy every bite when I had a super-strong craving.) I’d also long-ago traded cow’s milk for almond and coconut milk, and after limiting my cheese intake to the occasional treat, my trips to the bathroom became almost super-hero worthy. (TMI? No such thing around here.)

So when I decided to take the plunge and do a 30-day Paleo challenge—where you eat like a caveman and avoid grains, dairy, legumes and processed foods—it wasn’t that big of a stretch of my plate or my palate. I get protein at every meal, snack mostly on fruits and nuts, and, boy, oh, boy, do I love my veggies and Big-Ass Salads. And I was really curious to see how it would make me feel—not to mention hopefully have the side effect of boosting my fertility. (I won’t get into details here, but food greatly affects hormones. If you’re interested, I highly recommend The Paleo Solution by Robb Wolf. It was a scientific eye-opening adventure for me that really forever changed how I look at food.)

And, a bit to my surprise, Ryan was happy to do it with me. (Have I ever mentioned he’s the best husband ever? He is.) So, for a whole month, we stayed clear of all gluten, grains, beans and dairy. We passed on the beer. We ate burgers without the bun. We went through jars and jars of almond butter. We cooked way more at home. The phrase: “Nom nom Paleo” became a happy mantra before a meal. 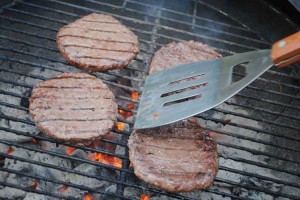 During our 30-day Paleo challenge, we’d use lettuce or even two big grilled portobello mushrooms as buns. Surprisingly awesomely delicious.

Because eating Paleo/primal/caveman is kind of up to interpretation (there are about a million opinions on what is and is not Paleo), we decided to make our own rules, following Wolf’s advice to not go psycho with it. We drank tequila and wine a few times, had the occasional white potato (although we did avoid corn altogether) and allowed ourselves a piece of super-dark super-clean chocolate. This might cause some people to say we didn’t really “go Paleo,” but I happily thumb my nose at those perfectionists. If I’ve learned anything in my life, it’s that you have to do what’s right for you. And red wine and dark chocolate is right for me, my friends.

Sure, we were a pain in the ass at restaurants (“Now, what’s on that steak? Is there butter in your grilled veggies or olive oil?”), and our families were incredibly supportive yet a bit inconvenienced about accommodating our new way of eating, but it was also incredibly simple once you got into the groove of it. Dinner was usually a high-quality protein, a roasted veggie and maybe a sweet potato. Breakfasts were an apple and a few eggs. Lunch was a salad or leftovers. Snacks were heavy on the nuts. To be honest, we ate really, really tasty food because we put so much attention and planning into what we were eating versus no planning, starving, ordering a pizza and scarfing it down. It was actually fun, and everything we ate was SUPER delicious and flavorful.

I want to emphasize that in no way was this a crash diet or did I do it to lose weight (in fact, I didn’t lose any weight). Nor was going Paleo about deprivation in the least. It was just the next step on my healthy living journey and a way for me to learn more about what works for MY body and MY life. If you told me four years ago—or even a year ago—that I’d complete a 30-day Paleo challenge without feeling deprived, I would have said you were cray-cray. But at this time in my life—when I’d say my intuition, self love and confidence is at the highest it’s ever been—it was simply the next logical step.

For me, Paleo is my lifestyle—not a diet. Now that I’m done with my 30-day Paleo challenge, I’m still eating about 90 percent Paleo and plan to continue because it does make me feel so darn good. My husband, on the other hand, has already added back in organic milk, cheese and grains on occasion—plus lots of beer—so he’s about 60 percent Paleo, I’d say. For the record, he also has the stomach of a billy goat.

Because I have about a million things to say about my experience, next Monday I’ll be sharing tips for trying a Paleo way of eating, along with my personal experience of the good and the difficult about it. The Monday after that, I’ll share one of my all-time favorite Paleo dessert recipes that I kind of accidentally concocted after a very non-Paleo craving: banana ice cream with chocolate mousse topping. It’s awesome. So, stay tuned for more on my Paleo experience!

Now tell me, any other Paleo peeps out there? Has anyone else done a 30-day Paleo challenge? Was your experience similar to mine? Would love to chat about it in the comments! —Jenn