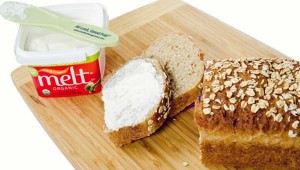 A doll0p of Melt Organic Spread will do ya!

For years, we’ve been trained to stay away from fat for our health. After all, you’d think that eating fat makes you fat (I still hate that word as a descriptor…). But the nutrition and health community has finally learned through research that that simply isn’t true. In fact, the right kinds of fat in moderation can help you to burn fat. And it helps keep you full. And, um, it’s delicious. Lately, my favorite source of fat is coconut oil (told you I’ve been obsessed with coconut!), so a recent offer to try Melt Organic Buttery Spread—which has a blend of healthy fats in it, including virgin coconut oil—I could not resist.

A so-called “perfect blend” of organic virgin coconut oil, flaxseed oil, palm fruit oil, canola and hi-oleic sunflower oil, a one-tablespoon serving of the stuff has 80 calories, nine grams of fat (3.5 of which are saturated and 425 grams of which are omega-3s), 85 milligrams of sodium and 15 percent of your vitamin E needs for the day. It’s also soy-free, gluten-free, trans-fat free and has no artificial stuff in it. It’s also kosher and fair trade. And the ingredient list is totally sane. Unless you’re a vegan (there is real butter in it), I can’t see a reason why you wouldn’t want to try swapping this stuff out for your usual butter or buttery spread.

It tastes good, too. Buttery and a little salty, it spreads and melts like a dream. You can cook with it, bake with it and spread it on everything from your toast to your roasted asparagus. The only different thing about Melt Organic is its mouth-feel. It’s a bit grainy when spread (fine when melted) and takes some getting used to. I’m guessing it’s the coconut oil that gives it that texture—but after trying it a few times, I totally didn’t mind it, especially since it is rich and creamy beyond that. But if you don’t like grainy things, you might have a hang-up there.

With all that said, here’s what I really, really love about Melt Organic: its fat ratio. Yeah, that sounds complicated and weird, I know. And I don’t want to bore you with numbers and stuff, but there’s serious research that suggests that we Americans could greatly improve our health by eating a more balanced mix of fats. And with an omega-6 to omega-3 ration of 2:1, Melt Organic is pretty much ideal from what the researchers are saying. Not to mention that Melt Organic is a good source of medium-chain fatty acids that your body burns as energy instead of storing as fat, thereby boosting metabolism. (You can thank the coconut oil for that!) Oh, and you can freeze the stuff. LOVE THAT.

While I’m still using my coconut oil for most of my cooking needs, when I need butter for a cookie recipe or simply want a smear of the stuff on my baked sweet potato, Melt Organic is now my go-to fat. Has anyone else tried it? Want to? Concerned with fat ratio, too? Obsessed with coconut oil? Girls, tell us about it! —Jenn