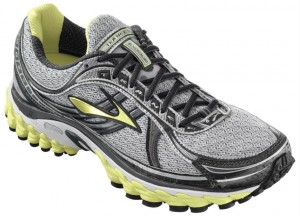 There’s a pattern starting to form here. I start to run; Brooks running shoes make their way onto my feet. It’s magic, really. For my first marathon, I decided I was going to get the perfect shoe for my imperfect stride, so I went to a running store to get properly fitted. I felt like a cool G up in that place; multiple employees watching me run on a treadmill, analyzing how my feet work and then finding the best shoe. I went in that day fully thinking I’d get one type of shoe, but to my surprise, I was given a Brooks Running shoe. At $178 bones, I coveted that darn shoe like it was dipped in gold-awesomeness, and it totally did the trick. I ran the ish out of that marathon and proudly kissed my shoe (the top) back in the hotel room…before my nap.

Now that I’m back in the running game, I’m glad I had the opportunity to try out a new type of Brooks shoe. The Trance 11, first of all, comes in my lovely size: 12. SCORE! Second, I’ve run in these bad boys for two weeks now, and I must say they’re totally different than my first pair. They’re a bit heavier, but I have yet to throw my orthopedic inserts into them, so maybe heavier isn’t so bad. (Brooks has been doing its pronation research, apparently.) Even better, they’re cheaper! Granted, $140 is still an investment, but pushing almost $200 last time for a shoe was a hard pill for my cheap butt to swallow. 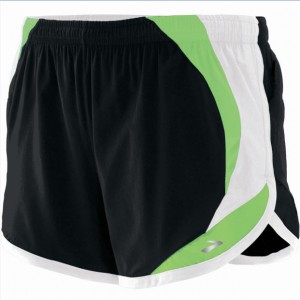 I swear to Hermes, Jenn and I have the exact same hang-ups with super cool running gear. Wearing short shorts makes me feel like a poser, too. Like somehow I should be running at a six-minute-mile pace or faster just to even look at those bad boys. (Read: Wayne’s World, “We’re not worthy!”) But a hang-up’s all it really is. Anyone can and should rock a short that allows them to spread out and stretch those legs.

Note: These are not the shorts for planks and push-ups! I wore the Infinity Short II pair on a run in the park a while back, and my boyfriend decided we should do some planks and sit-ups. I was mortified and terribly uncomfortable because I’m the gal who loves to rock shorts down to my knees. (I am tomboy; hear me roar!) As soon as squat work was over though, I was back to running and feeling good in ’em.

Fun Facts: The shorts have a great little pocket in the back for energy gels, as well as an area for your key and license. I can totally justify spending more cash ($44) when the shorts offer up secret goodies.

Holy cuppage! The Glycerin Support Tank II actually cups, carries and casually pads my lady parts from cool breezes. Those three C’s make it my favorite out of the three Brooks products. This is a fun tank to rock, both for its function and its form. It’s actually a fitted tank that works well for smaller cup-sized Fit Bottomed Girls like me, as well as B and C cups. It packs the same secret pockets for gels and IDs that the shorts have (Brooks Running is all about runners, after all), and, most importantly, it’s long so it doesn’t constantly ride up around my belly button when I’m trying to get my run on.

It sells for $50, which at first seemed a lot for me, but considering it’s a bra, a tank and a tummy-saver in one go, I’d say that’s pretty darn cost savvy. Killing three birds with one tank is a darn good deal!

Fellow runners, what running feature do you have to have in order to get your run on effectively? —Tish