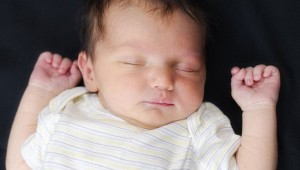 As documented here, my daughter was not the world’s best sleeper. In fact, it wasn’t until 10 months or so that she even slept more than four hours in a row. She would be up multiple times through the night wanting to nurse, and some nights she was just up, wide awake, fussy, for hours.

The new addition to the family? He sleeps. Wonderfully. Before, I thought the term “sleeping like a baby” was the biggest joke ever. Now, I use it to describe Owen’s sleep. He’ll go down for the night when my daughter goes to bed and will sleep until 2 a.m. Or 4 a.m. Sometimes even 5 a.m.! This is absolutely shocking to me. I always thought this is what babies were supposed to do after awhile but had never experienced it before. (Even now, my daughter will still wake up through the night occasionally, and she’s almost 2!)

I truly don’t feel like I’ve done anything differently with No. 2 than I did with No. 1. They’ve been as different as night and day even before they were born. I’m definitely more aware of when Owen starts to get sleepy and fussy. And I’ve been following the sleep rule about putting him down to bed sleepy, but not asleep. But I couldn’t really follow that rule in the early days with my daughter; when put down sleepy, she’d freak out crying. I put him down, however, and he’s content to just look around sleepily, waiting to doze off. It’s probably a combination of two different kiddos, a little parenting experience under my belt and a good bit of karma because I totally deserve a sleeping baby! I’m sure I’ll pay for it in other ways. Like he’ll be the pickiest eater on earth. But at least I’ll be well rested enough to deal with it.

Were your kids similar sleepers or polar opposites? —Erin