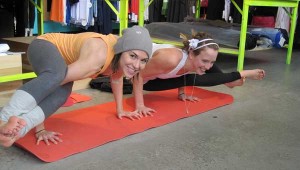 Your upper body is probably stronger than you think! Credit: lululemon athletica

So, I’ve been slowly easing back into fitness. Once I got the doctor’s approval to work out, it was kind of a joke. Like I had time to do more than stroll with the kids! But as the kids settle into a routine and as I have more energy and sleep, I’ve been able to bump up my exercise. I started with Zumba once a week, and now I’m hitting the gym for short workout sessions, slowly easing my daughter into the daycare situation.

As a part of my new gym membership, I scored several personal training sessions. Susan, my trainer, turned out to be totally awesome. She asked me if I did push-ups, and I said I did modified push-ups, from my knees. She shook her head, like, “Oh no…you will be doing real push-ups.” She was like “Girls can do real push-ups. You don’t have to have a huge range of motion at first, but you really can do them.”

I was skeptical. Like, okay, give me a few months of getting back into the groove, and then I might try it. But on the second session, she had me do push-ups at an angle on the Smith machine. For the second set, she put me to the test. I did one push-up. Then two. Then three. Then four. Then barely eked out the fifth. But seriously, I never would have thought I could do five real push-ups, especially because it’s not like I’ve been practicing. And according to Susan, my form was impeccable.

Here’s where I give my kids all of the credit for my strength. Apparently hauling a nearly 30-pound toddler and a 17-pound 4-month-old all day will give you some serious upper-body muscle. Kids really are a strength workout!

I’ll now be working up to 10 push-ups. Have you ever been surprised by a fitness achievement? —Erin