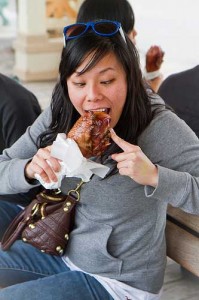 Last week, I shared all about my 30-day Paleo challenge, where I ate everything but grains, legumes, dairy and processed foods. (I like to describe it that way versus what I couldn’t eat because seriously, there’s still a TON of stuff to eat when you go Paleo, and I like to focus on abundance in my diet and life—not deprivation.) Because this whole going-Paleo thing is so big and I know there are a lot of curious/interested readers, I wanted to share a few lessons learned from my experience. So read on for my best going-Paleo tips, along with the good and the difficult of eating like a cavewoman. Roar! (I find roaring helps get in the Paleo mindset.)

9 Paleo Tips: What to Know Before You Try It

1. Read up. If you eat like most Americans do, going Paleo is a huge change and a big commitment. People might think you’re crazy. Scratch that. Some people will think you’re crazy and possibly disordered. So make sure you know why you’re doing what you’re doing. Not just to field questions, but so that you can make sure it’s right for YOU. I highly, highly recommend this book. I said it before, and I’ll say it again: it’s a life-changer. Being armed with the science helped me to stay on track and focus on how much my health was benefiting from my new way of eating.

2. Take baby steps. There are people who go from usual diets to Paleo and thrive. But, I’m pretty sure if I had done that I’d be all kinds of yo-yo dieting again and, heck no, I will never go back to that messy headspace. Like I said in my first post on the 30-day Paleo challenge, I would never have gone Paleo without it being a natural evolution and giving me huge health benefits. So if you’re interesting in trying a Paleo way of life, I’d recommend taking some grains or dairy out and see how you feel. Then a little more and then a little more. Tweak it to fit your life until you feel like you’re ready and excited (not deprived or doing it just to lose weight) to take the full plunge.

3. Get a game plan. Going Paleo takes some prep work. You should clean out your cabinets of all non-Paleo goodies (that way you don’t accidentally go off Paleo without realizing it—easy to do at first!). Find some tasty Paleo recipes to try. Stock up on this Paleo shopping list. Figure out what you’re going to eat for breakfasts, lunches, dinners and snacks. Get up a few minutes earlier each day to have a proper breakfast (dude, eggs and bacon are awesome in the a.m., even if they do take a few more minutes of time), and pack Paleo snacks with you no matter where you go. Take the time to plan for your new way of eating and get excited about it!

4. Prepare for eating out to be a biotch. There’s really no way around it; eating out can be challenging and pricey. Most of the time, you’ll be ordering a salad with no cheese or croutons (and plain oil and vinegar as dressing) and extra meat, or a meat-only entree with veggies (of which you’ll have to drill the server on how everything is prepared). Obviously, some restaurants are more accommodating than others, so choose a friendlier place whenever possible. We found it was often tastier and easier to eat a home than going out! Saved us some dough…

5. Tell your friends and family. Remember what I said in No. 1 about people thinking you’re crazy for going Paleo? Well, it’s best to tell those closest to you what you’re doing and why. Be patient, answer their questions and tell them how to best support you. Then, if you go to a social occasion or party, be sure to bring something you can eat and share it. While you may have friends and family change their food plans to accommodate you (I was lucky enough to have that!), it’s best to come armed with Paleo foods. That way people can see how tasty it can be, too!

6. Get creative. Meat and roasted veggies were a staple for dinners at our house. But, that doesn’t mean we got sick of the same meal. Try different fruits and veggies, pick up different cuts of meat and even experiment with different spices and herbs. I made pork tenderloin with curry powder and sweet potatoes in the Crockpot one night, grilled ahi tuna steaks with roasted Brussels sprouts another, and did bison burgers with portobello mushrooms as buns and roasted sweet-potato fries on the weekend. For lunch, turkey lettuce wraps or Big-Ass Salads with the best dressing ever were the norm. And eggs—there are so many ways to cook an egg. There are so many tasty options, so have fun with it!

7. Do not make it a “diet.” Like I said, this is not a crash diet; it is a lifestyle. So listen to your hunger. Eat when you’re hungry. Stop when you’re full. Focus on the healthy foods you’re eating and don’t mourn the stuff you’re not. If you follow No. 6, you can probably find a Paleo-way to satisfy any craving you have—and if you can’t, I bet Google can.

8. Have a few plan Bs in your back pocket. Life happens, so even your best-laid of Paleo plans will go awry. You’ll wake up late and not have time to make breakfast. You’ll bust out a protein bar you think is Paleo only later to figure out it’s not (that happened to me a couple of times—watch out for the soy and rice syrups!) Hey, it happens, so cut yourself some slack. However, it’s best to stash Paleo-friendly snacks everywhere you go (purse, work, car, etc.), so that you always have a snack. That way you’re never in a situation where you’re starving without food—and nachos and beer are calling your name. ‘Cause that sucks.

9. Make your own rules (but stick to ’em). There’s no full agreement in the Paleo community on what is and isn’t Paleo. Some eat quinoa, some don’t. Some eat white potatoes, other don’t. Some drink tequila, others limit all alcohol altogether. Heck, some eat high-quality butter. I chose to drink limited amounts of red wine, tequila and chocolate for my sanity. So feel free to fudge a few of the rules for what’s best for you, assuming, of course, that the main no-grains-legumes-dairy rule is followed. If you’re doing a 30-day Paleo challenge, stick to your rules for the full time so that you can really see how much different you feel. But if you’re not doing a set challenge, you might want to try going Paleo at just breakfast or lunch, and then adding on from there as you adjust. It’s your diet and life, so do what feels right for you.

Going Paleo: The Good (For Me at Least)

Going Paleo: The Difficult (For Me at Least)

Notice how the good and the difficult kind of mirror each other? Hmmm…wonder if that was on purpose. (Read more factual pros and cons of the Paleo Diet here.)

Alrighty then, next week I’ll share my No. 1 recipe for beating sweet, chocolatey cravings with a super-delicious Paleo treat that you can serve to anyone—anyone. It’s so good, I give thanks for it every time I make it.

In the mean time, you Paleo people, do share your Paleo tips and what’s good and difficult for you in the comments. Would love to hear your take! —Jenn