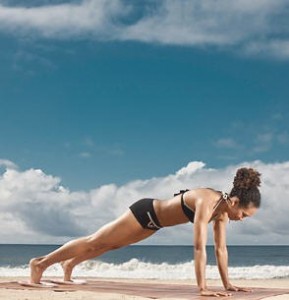 We’re talking fitness bucket lists—you know, the stuff we want to do before we die—for this edition of Question of the Week!

This may come as a surprise to some, but until we were given this idea, I had never thought too much of any fitness goals. Crazy? I know. If I’m being completely honest, I’d say I’m the kind of fit bottomed gal who knows staying active and eating right is smart and groovy, but I’ve never really taken it much farther than that. So, I created some lovely goals and got on the bucket-list bandwagon. It’s a fun wagon to be on, I must say!

1. Plank it out. When Jenn and Erin first mentioned fitness bucket lists, this was the first thought that popped into my head. I’ve been wanting to do a two-minute plank for quite some time. (Years, actually!) So far, I’m up to a minute. I can’t wait for the day when two minutes is up, and I’m still planking. It’ll happen, dang it!

2. Run Runyon. The last time I attempted Runyon Canyon I about died. Somewhere in between the slow walking, stopping and heaving, I made up my mind that one day I’d run up that darn “hill,” and by golly, I plan to!

3. Do a pull-up. Lately I’ve been training in a nearby park with my boyfriend. I love being outdoors and don’t mind sweating in public, but it was annoying and then some when a random stranger approached me and told me I was basically a wimp for doing an assisted pull-up using my band. (I wanted to take the band off the bar and slap him with it.) I decided instead to channel that violence and be like Jenn. Well sort of…If I could do just one pull-up on my own I’d feel like a total bad-ass and die a happy woman.

Okay, so I only have three on my list right now, but that’s just because I’m a newbie at this. The list will keep growing I imagine—now that I’ve got bucket lists on the brain and I’m trying new workouts and moves each and every sore day. Funny, I bet you can tell a lot about a gal based on her fitness bucket list…So what’s on yours? —Tish