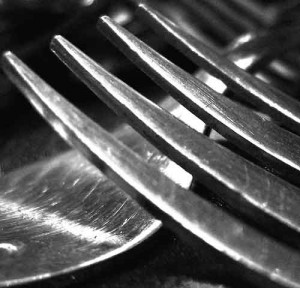 Would you bite into smaller portions if you got to dish it up? Credit: kevindooley

Last week, I wrote about how a new self-serve frozen yogurt place in my neighborhood has me being very careful. I treat myself every now and then, but at this place in particular, I have to be mindful of my portions lest I add every bit of candy or topping that looks tasty. Because everything looks tasty.

One commenter made the point that the ability to build-your-own allows you to have control over the cost and calories. In the last part of the comment, she (more or less) asked if I was suggesting that we need an employee to help us control how much we eat.

If I had my way, I’d love it if everything was self serve. (Minus the whole gross factor of the general public also serving themselves.) Because just as we have the option to go overboard and fill the container to overflowing, self-serve also gives us the option to stop when we want to. A lot of times, I feel like food establishments want to be considered a good value for the money, so they really fill you up, so to speak. If it’s a single scoop of ice cream, they cram your cone with what can only be considered three scoops. If it’s Chipotle, they give you so much it’s like they’re trying to preemptively prevent you from asking for “extra” anything. At Wendy’s, the medium drink is the old large—and I’ve yet to learn my lesson on that.

If I could serve myself, I guarantee my portions would be smaller on the whole. It’s a lot easier to dish up less food and walk away than it is to stop eating when you’ve got food in front of you (at least for me).

What about you? Would your portions be smaller if you were in charge at restaurants? Are you good at boxing up meals for later consumption? Are you able to walk away from a too-large ice cream cone when you feel satisfied? Do tell. —Erin