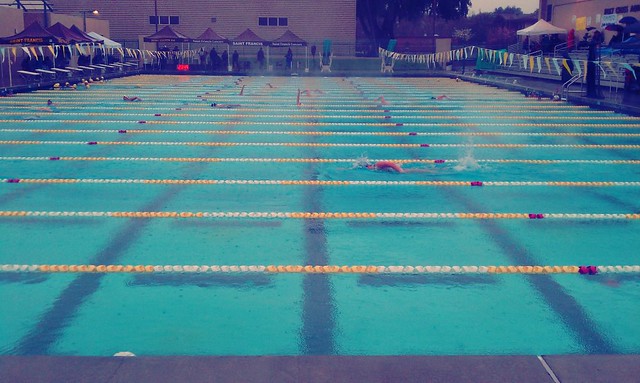 Is it too late to want to compete in my first swim meet? I don’t think so. Credit: brianc

Our most recent Question of the Week, What’s on Your Fitness Bucket List?, might’ve been my favorite ever. It inspired me and made me think. Actually, I haven’t stopped thinking about it. There are just so many cool things out there; how can I be expected to keep my list to only five?

I can’t. So, I figured I’d extend my QOTW a bit and list a few more items on my fitness bucket list in today’s blog post. And, as I mentioned last week, I’d love to know what’s on your list as well!

1. Compete in a swim meet. There’s been some chatter about starting a masters swimming team here in town, and boy, would I love to get in on that. I’d enjoy having a reason to improve my non-freestyle strokes, plus, I think it would be amazing to actually compete in the same events the Olympians do. Nothing would be more humbling (and simultaneously inspiring) as comparing my times to some of the world’s best swimmers!

2. Play in a beach volleyball tournament. I was signed up for one a few years ago, but a hurricane came through and the tournament was canceled. By the time they’d rescheduled it, my partner was pregnant with her first child. Since then, it just hasn’t fallen into place. But I hope to make it happen in the next few years!

3. Run a race with my dog, Rudi. This has a little more to do with obedience training than fitness, but I think it fits. I ran a race with my old dog, Yuki, and while Rudi is just as athletic, she’s a little more challenging in a group setting. I’ve been working hard to get her to a point where she’s easier to walk in public, and I’m very hopeful that this fall she’ll be ready for her first Dog Days Race here in Gainesville.

4. Play in a three-on-three basketball tournament with my husband. And, obviously, two other people. I played in a lot of these growing up—any Gus Macker fans in the house?—and since he and I have such a great time playing in pick-up games together, I think it would be an absolute blast to play in a co-ed tournament together. Although the more interesting part for spectators might be watching the two of us try to get up off the couch the next day.

5. Become comfortable cycling on the road. Do you know how much easier it would be to get in my miles on the bike if I would ride on the road? Not to mention the fact that, if I wasn’t so scared, I could be more of a bike commuter, which I’d love from a green standpoint as well. I know it’s just a matter of riding more and becoming more confident on my bike, so, I don’t know. Maybe next year?

Are any of these items on your list? Got any suggestions for helping me check these babies off the list? —Kristen