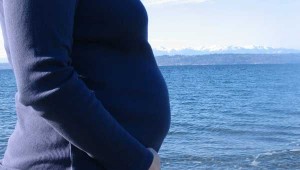 Is there anything to be done about a breech baby?Credit: Mrs. Flinger

Nicole Crawford, AFPA-certifed pre- and post-natal fitness specialist, is the Women’s, Kids and Family Feature writer over at Breaking Muscle. She recently talked to Katy Bowman, founder of the Restorative Exercise Institute, about breech babies, what you can do to turn one and how proper posture helps.

I was 36 weeks pregnant with my first child, and I was ready. I had read all the pregnancy books. I met with my midwife regularly, as well as my “normal” OB/GYN. I was in great shape, ate well, and had my handy checklist and birth plan hanging on the fridge. The only thing I wasn’t quite sure of was whether I wanted to give birth in a squatting position or birthing tub.

But I wasn’t prepared for what my doctor told me at my 36 week check-up. Despite my strong feeling to the contrary, my baby was STILL in the breech position. She hadn’t budged since the beginning of the second trimester, in fact. She was plenty active, but flipping onto her head wasn’t in her game plan. So I added a new item to the to-do list: “Schedule C-section.” My daughter ended up coming on her own time, but she didn’t turn around. She was born via emergency C-section two weeks later…and it was the most amazing moment of my life. But of course, I looked forward to my VBAC the next time around.

Then, two years later, I heard the exact same words from my doctor about my second child. After an entire pregnancy in the head-down position, she had turned around at 35 weeks. When I found out she was in breech, I started doing some research. I had heard people say that I was too small to have a baby “normally.” Maybe they were right. I researched all the possible causes of breech presentation. I tried moxibustion, inversion and even the Webster technique. I think perhaps if I had started sooner, there might have been hope. I told myself there was still time, but before I knew it I was in labor. I had my second c-section due to breech presentation, and my beautiful little Sunniva came into the world.

Ever since, I’ve been fascinated with the topic of fetal positioning. I know, what a nerd. But it’s actually an amazingly complex topic. That being said, I’m not a chiropractor. I have a limited knowledge of human biomechanics. So I decided to ask someone who has extensive knowledge in this field to share a bit about those breech babies, and what moms can do to optimize fetal positioning. So without further ado, here is a short interview with Katy Bowman, founder of the Restorative Exercise Institute. She is an amazing lady and also a mama of two. If you haven’t already, check out her awesome blog, Katy Says, to learn more about her. Read on fore more about this topic.

Add a comment Cancel reply
6 Comments
Just for You
Working out at home
Get free strength, cardio, yoga, and meditation videos.
Try them
STAY IN THE KNOW
When new stuff happens, you'll be the first to know!
About Us
Jenn and Kristen are passionate about letting women know they're more than a number on the scale.
Get the deets
Instagram
X