You’ve heard of eating clean, but how about NudeFood? According to the company, Nude Food is all about nutrient-dense foods (Get it? NUtrient DEnse?), and following the idea that a calorie is not a calorie, all of their products are made up of ingredients with no empty calories, but rather chock-full of vitamins, minerals, protein, fiber, carbs and good fats minus the synthetic vitamins or preservatives. They’re also gluten-, soy-, dairy- and corn-free in case you have allergies or are eating Paleo. But how do they taste? And are they worth your hard-earned buckaroos? We try ’em to find out! 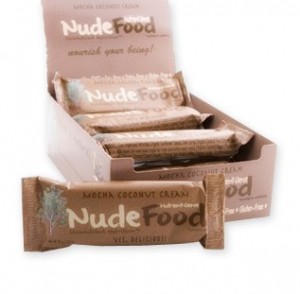 With about a million bars on the market these days, it’s hard to stand out, but I’ll make a case and say that this bar is actually different. With fun flavors that’ll delight the foodiest of fit foodies—Mocha Coconut Cream, Spicy Chocolate Chai, Walnut Brownie Mint, Pineapple Pomegranate Walnut are a few of them—these NudeFood Bars aren’t oversweet, and they certainly satisfy. I took these as a snack during this insane three-day feat of endurance, and they hit the spot big time. Dense without being too-too heavy, they filled me up.

And they should—each one of these bars clock in at a whopping 300+ calories and 25+ grams of healthy fat. Each bar also has about 8 grams of fiber and 10 grams of protein. Again, with an ingredient list you’ll want to hug it’s so friendly, this is all really good stuff. But you’d want to eat one of these when hiking or in place of a meal when you’re on the go. Unless you’re super-duper active, it’s probably too heavy for a snack. You could try eating just half of a bar, but if you’re anything like me, eating just half can be hard to do when it’s so tasty!

And they are tasty. Really tasty. Mocha Coconut Cream blew my mind, and Walnut Brownie Mint fulfilled my chocolate-mint fantasies, of which I have many. At $3 a bar, they’re not cheap, but if you eat them as a meal…well, that’s a dang nutritious and affordable meal. I’d eat them again for sure. 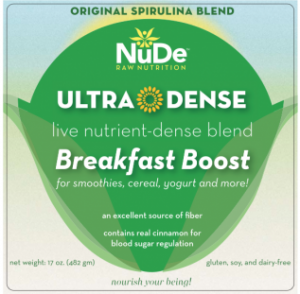 Not into the protein bar scene? Why not try NudeFood’s Ultra Dense Breakfast Boost, which is meant to be used in smoothies, oatmeal, yogurt, salads or even on a topping on soups and sundaes. Made with almonds, organic sunflower, flax, hemp and cinnamon, the crumbly stuff (think of soft, crumbled graham crackers) packs a punch. In just one heaping tablespoon, there’s 170 calories, 12 grams of healthy fat (including omega-3 fatty acids), 7 grams of fiber, 10 carb grams and 9 grams of protein, in addition to naturally occurring vitamins and minerals.

First, I really dig the ratio of the carbs to fat to protein. Good stuff there. Second, it comes in three different flavors that all have a slightly different benefit. The Original Spirulina Blend has, of course, spirulina in it. The Coconut Pecan Probiotic Blend has, as expected, coconut, pecans and probiotics, along with chia seeds. And the Antioxidant Berry Blend hits ya with dried blueberry, acai and black currant powder. While the Original Spirulina Blend tastes the most natural, the Antioxidant Berry Blend has a pleasant berry flavor, and the Coconut Pecan Probiotic Blend is super yummy with a rich and sweet, nutty tropical taste to it (my fave of the three!). Third, these Breakfast Boosts have been perfect for my husband, He Who Cannot Eat Enough Food (God bless him). I’m in charge of morning-smoothie making and he gets two, sometimes three, huge tablespoons of this stuff. And he loves it. I, on the other hand, give myself an even tablespoon on days when I know I won’t be eating that clean or really need my smoothie to tide me over to lunch without a snack. Lastly, the stuff costs $22 for a bag, which might seem high, but a bag will last you months and months, so it’s really not so pricey.

Again, these NudeFood Breakfast Boosts and Bars are DENSE. And that’s their point. Almost 200 calories in a heaping tablespoon is a sure-fire way to turn a normal smoothie into a calorie-packed one and a few 300+ calorie snacks a day and you can easily be eating more than you need, so sprinkle/nibble lightly and just be aware. Yes, everything in these products is healthy, but like we say, all good things in moderation!

Have you tried any NudeFood eats? Do you pay attention to how nutritionally dense your food is? Let’s discuss! —Jenn