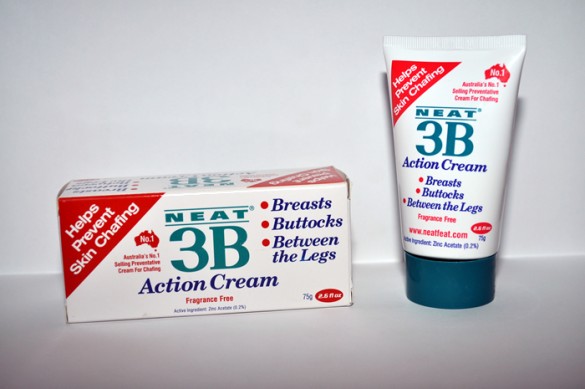 Neat? SUPER neat, if you ask me. Credit: Kristen Seymour

Let’s cut to the chase. When I run, things chafe. My thighs, even when I’m pretty darn lean, rub together, and sometimes my sports bra hits me in a bad spot. And we’ve already discussed the ass chafing. So, yeah, it’s an unpleasant side effect of running, but one that I’ve learned to deal with.

For example, I generally run in longer, fitted shorts or capris to minimize the inner-thigh issue, although, let me tell you, in the heat of a Florida summer I’d really, really rather be out in running shorts. And over the years, I’ve gone through more sticks of Body Glide than I can count, and it’s great…except, sometimes, there are spots that are kind of hard to reach with a stick. See the paragraph above if you don’t follow.

Keeping that in mind, let me introduce you to my new best friend, Neat 3B Action Cream. It’s designed to combat both chafing and sweat rash, specifically around the breasts, buttocks and between the legs (their words, not mine). Because it’s a cream, it’s easy to apply anywhere you can reach, which, well. You know. That’s a good thing.

Rather than just lubricating the chafe-prone surfaces, Neat 3B Action Cream also works as an antiperspirant to stop some of the sweatiness that contributes to the chafing. It’s fragrance free and not greasy; in fact, I’ve accidentally rubbed some directly on my clothing and had no problems with staining.

It’s already the top preventive cream for chafing in Australia, and I have a feeling it’s going to ease plenty of friction here in the States, too. Neat 3B Action Cream starts at $13.95 for a 75-gram tube (which is what I have—I’ve been using it fairly often and there’s loads left). Not a bad price to pay for some pain-free running.

We’re all friends here, so now’s your chance to share: Do you have issues with chafing? What do you do about it? —Kristen