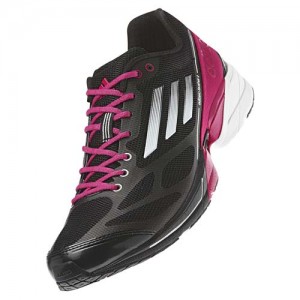 What does “natural” running mean? Well, best as we can tell, it’s running as close to barefoot as possible without actually going barefoot. And if you’ve ever been on FBG before, you know it’s a big ol’ trend. There are so, so, so many minimalist shoes coming out. Scratch that. Most major brands are coming out with lines of minimalist shoes that cater to every kind of runner. Want to go totally natural? Mostly natural? Just a touch au naturale? Well, there’s pretty much a shoe (or 12) out there for you. And today, we’re taking a look at a few from adidas’ Adipure and Adizero line.

First, let’s talk about the Adizero Feather 2. We’ve reviewed the Adizero Rush before, and these are right there in the same vein—a minimalist shoe that’s going more barefoot but still feels more like a running shoe than your bare feet. They’re light as heck, close to the ground with some support and cushioning, and oh-so airy with a breathable air mesh upper.

Made for running—and fast—they’re also not a bad fit for a CrossFit or boot-camp style workout where you’re asked to run a little, lift a little and who knows what else. And while these are light as a feather, they are certainly not stiff as a board. Although not super flexible, they definitely have some spring to ’em! For $100+, they’re not cheap, but they are hella cute. And did we mention fast? 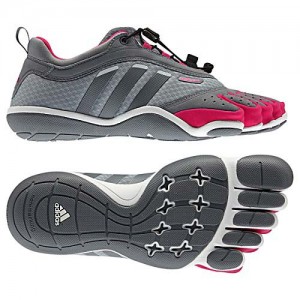 Next, let’s tackle the Adipure Lace Trainer, which are in a class of shoe otherwise known to us as amphibian toes. Before we get too far into my thoughts on this one, let me remind you that I have wonky pinky toes that don’t like to separate. So, I’m guessing that I’m not really their target market. Regardless, I gave these my best shot. And I have to say, this was the most comfortable pair of amphibian toes I’ve tried thus far. While I couldn’t get my left pinky to cooperate, I got my right one in perfectly! Although I’m not exactly sure why these fit me better than past models, I think it has something to do with the shoe’s tongue and expanding width—you pull on the little laces and have lots of room to maneuver and get things in the right place. Nice feature, adidas.

Other than that, while the toe-separation feels weird when you’re just standing there, once you get moving, it feels surprisingly normal. I found these to be good for a short run or even a workout DVD. (I may have also chased my dog around in them, which is wicked good cardio.) Despite being so barefoot-y, these have a sturdy sole for support. They also have little vents for your toes, which is helpful and—let’s be honest—darn cute. At about $90 a pair, these are good deal to lace up. Get it? Adipure “Lace”? Har. Har. 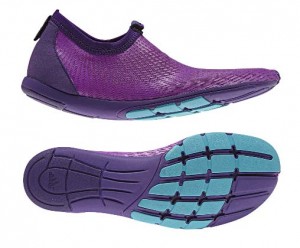 Make no mistake about it, the Adipure Adapt with only a 4-millimeter drop is for the advanced natural runner. And for those who like water shoes. Don’t they look like water shoes? As soon as I put them on, I had childhood flashbacks of my awesome times running around Oceans of Fun water-park. (Yeah, I had water shoes as a kid—I was serious about my water play.) And they’re definitely a conversation starter. I’ve had neighbors stop me to inquire, and people in cars have even pulled over and asked about them. Which can be a bit freaky, so be aware.

So, yeah. They look funky on. But they feel more like a glove than a shoe. Which is darn cool. There are obviously no laces to trip you up or many of the other features that most running shoes have. With just a touch of cushioning, a flexible sole that propels you forward and bright, funky patterns, the Adipure Adapt is just about as natural you can go while having shoes on. Of the three I tested, these were my fave of the bunch!

While the only seams on the inside of the shoe are around the heel, I did have a bit of chafing on my pinky toes, but my heels (which are uber sensitive) were fine. So just be sure to test out the fit extra well when trying them out. And, you probably already know this, but ease into them. Even after going for just a mile and a half my first time out testing these, my calves were sore for days! If you’re a mid-foot or heel-striker, these will definitely have you running more on your toes. For less than $100, these are ones to try if you’re looking to really get into natural running!

Are you going more natural with your running and shoe selection? What styles are you putting your tootsies in? —Jenn