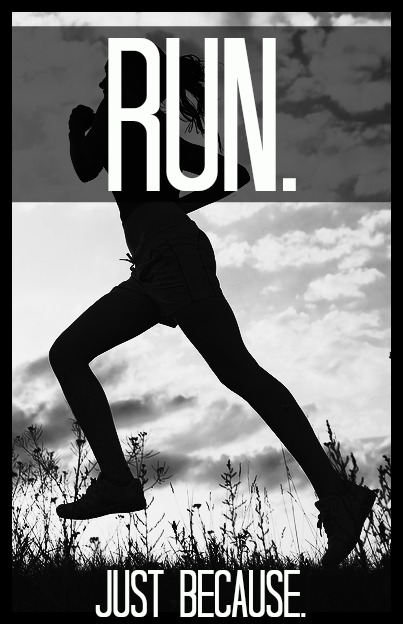 When you run with people, many of the same conversations come up. You talk about what you ate before the run, what you’re going to eat after the run, things you should and should definitely not, oh-for-the-love-of-God don’t EVER eat that before you run, and, you know, bathroom habits. I would say it’s just me, but every one of these things has come up with multiple running partners, and I’m only sometimes the one who brings them up.

Another common topic came up while I was running this morning with my friend, Kerri. She’d arranged an early morning trail run because her friend Joe was training for an ultra marathon and was having a hard time getting in his long runs. When she posted it on Facebook, one of her friends asked, “Are you training for something?” And Kerri’s not, but it brought us to this topic: Why do we only schedule long runs when we’re training for something?

I had that same conversation with three different people while I was training for a half marathon last winter. I rarely lacked company on my long runs, or at least for portions of them, and while I often ran with other people training for a race of their own, occasionally I’d grab a friend who was just looking for an excuse to get in some mileage. “Why is it so hard to make myself do these longer runs when I don’t have a race on the calendar?” they’d ask. And every time, we’d say that once my race was over, we’d continue doing 8- to 12-mile runs on the weekends. You know. For fun.

But it didn’t happen.

When Kerri was asked whether she was training for something, she responded that she wasn’t, but she really wanted to make a habit of scheduling (and finishing) long runs even when she wasn’t officially in training. How much easier would that half marathon training plan be if you were regularly getting in nine miles on the weekends to begin with, right?

And, aside from the fact that keeping mileage up makes real training easier, there’s the bad-ass factor. I would love to be someone who, when asked to join someone for a 10-miler, just says, “Oh, sure! Just let me grab my shoes,” instead of, “Is there a good spot for me to drop and turn back if I can’t stay with you the whole time?” Running 10 miles on a Saturday morning just because before meeting friends for brunch makes me feel pretty damn cool. And from the conversations I’ve had with friends, I know I’m not alone.

So why not do it? Why not commit to getting in a regular long run every week or two, regardless of whether I have a long race on my calendar? I know I’m not likely to pencil in two hours to run some boring path by myself, but spending a couple of hours on a trail or running through some pretty neighborhoods with friends? That just sounds fun.

I know enough runners that I can basically always find someone who’s training for something and could use a running buddy. And, if not, I clearly have a group of friends who just want to do it anyway. I think my mind is made up—these long runs? They’re gonna happen. Regularly.

How about you? Do you run long distances just to do it, or do you only put in the miles when you have a date with a starting line? —Kristen