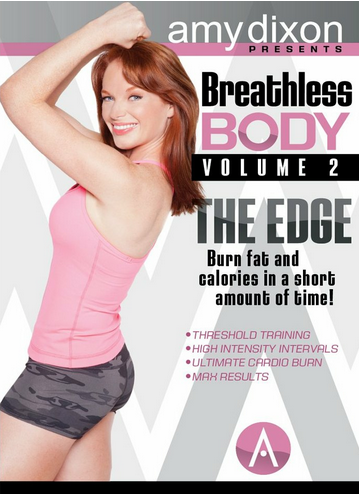 Like every year when the busy holiday season is upon us, I have found my life getting pretty hectic. Between traveling to Georgia for my boyfriend’s Ranger School graduation to visiting my brother in Japan for Thanksgiving, it has been really hard to get an awesome workout in that lives up to my high Fit Bottomed expectations. That is until I tried Amy Dixon’s Breathless Body: Volume 2, The Edge. (The fact that I missed Volume 1 is a sin.)

Although I live and breathe the gym, it is sometimes nice to be able to get a solid workout in at home…well, once I move around some furniture. Once the table blocks the door and the couch is moved back four feet, I have enough room to jump, do burpees and sprint around the room, just as long as I don’t disturb the neighbors! And with Amy Dixon’s Breathless Body: The Edge DVD, I used all four corners of my apartment and probably had the neighbors thinking their ceiling was going to cave in.

This workout was so good that it even gave my muscles something to ache about. Amy wasn’t kidding when she named her DVD “Breathless,” I could barely catch my breath, let alone have enough time to chug down some water in between sets. Her 50-minute plyometric workout kicked my butt and definitely left me exhilarated and stronger than when I started.

Breathless Body: The Edge combines threshold training and HIIT (High Intensity Interval Training), which are two of the most effective ways to torch calories and burn fat in a short amount of time. This workout consists of four major high-intensity interval sets with three drills in each set and finishes with one six-minute nonstop push to your anaerobic edge. (Hence the title’s “edge” and the “breathless” come into play.) The 12 drills during the workout consist of tuck-jumps, X-lunges and push-ups that get more difficult each round. Each drill lasts 30 seconds, followed by a 15-second rest, and each set is repeated three times. Once the four sets are done, the final six-minute finisher is all 12 exercises strung together without rest—exhausting.

Each one of her background demonstrators displays a different level of each exercise. Not only is the level-one intensity great for beginners, but levels two and three also give even the most advanced of exercisers a challenge. If you don’t think it’s hard at first, just give it time. During the first drill the intensity at level three was just enough to get my body warm, no gasping for air—bummer! But, man, was I caught off guard when the workout had me desperate for air, water and a break after just a couple sets. By the end of the workout, I couldn’t even fathom repeating each drill. Lucky for me, Amy’s positive attitude and the upbeat music pushed me through to the very end.

Fit Bottomed Line: Amy Dixon’s Breathless Body: Volume 2 is one of the best workout DVDs I’ve done, and I encourage each Fit Bottomed guy or gal to try it out. The best part is there are no weights involved, so it can be done anywhere. For me, this DVD will be a must-have while I travel across the globe!

Have you tried Amy Dixon’s Breathless Body: Volume 1 or 2? What did you think? —Raquel