Jonathan Bailor, the author of The Smarter Science of Slim, is becoming a regular here on this site because we just can’t get enough of his good scientifically backed info! First he shared with us how a calorie is not just a calorie, then he broke down sugar addiction with tips on how to break it. And today? He’s giving us the metabolism facts—and why it’s more complicated than just simple math. Be sure to check out Jonathan’s book, his podcast and follow him on Facebook, Twitter and YouTube! 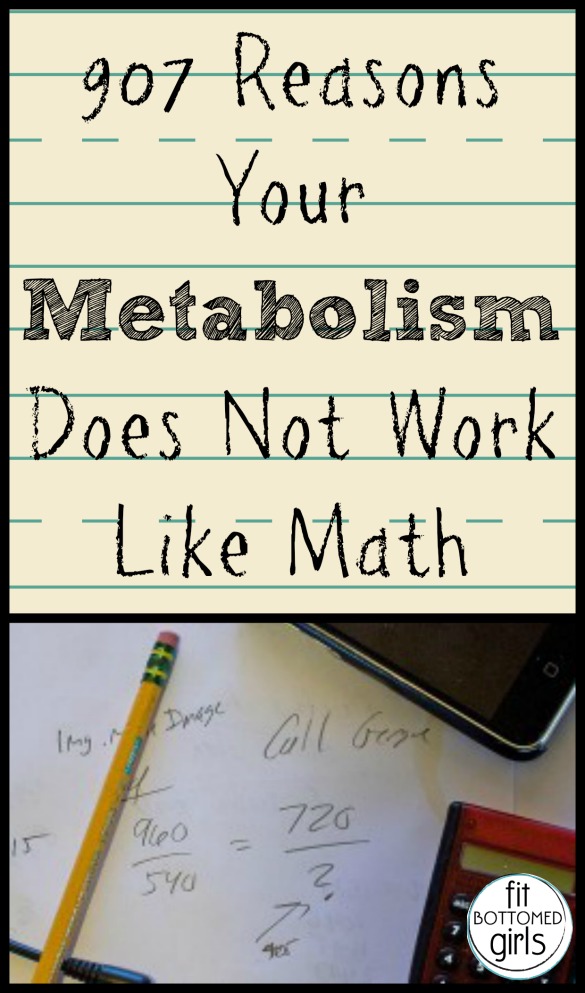 Some say the only certainties in life are death and taxes. I think we’ve been led to believe there is at least one more: Our metabolism works like math. Calories in minus calories out equals weight gain or weight loss. Eat more, gain weight. Eat less, lose weight. Simple. Obvious. Certain. Or at least that’s what I thought—until I saw hundreds of studies disproving the traditional notion that our metabolism works like math.

Startling Studies Showing Metabolism Does Not Work Like Math

For example, using a statistical technique known as “mathematical decomposition,” doctors Kiyah Duffey and Barry Popkin at University of North Carolina at Chapel Hill discovered that the number of calories consumed per person per day increased from 1,803 in 1977 to 2,374 in 2006, an increase of 570 calories per person per day. If we stopped here, you could imagine us concluding: “Yep, metabolism works like math. More calories in means we gain weight and that is just want happened. Off to the treadmill to increase calories out.”

But wait. Let’s actually do the calorie math and see how the metabolism-works-like-math theory compares to what happened with our weight over the last few decades. According to Dr. Duffey and Dr. Popkin’s data, by 2006 we were eating 570 more calories per person per day than in 1977. It seems reasonable to assume that we gradually worked our way up to 570, so let’s say that for the 29 years between 1977 and 2006, we each ate an average of 300 more calories per day. Three-hundred calories times 365 days in a year equals 109,500 more calories per person per year. If we multiply that by 29 years, we get 3,175,500 more calories consumed per person between 1977 and 2006. Super simple, and maybe that’s why the metabolism math theory is so popular. But does it work out in the real world?

If metabolism works like math, then between 1977 and 2006 we should have each gained about 907 pounds of fat. I know many of us have seen some weight creep on over the years, but none of us are looking down and seeing our scale showcasing numbers above 1,000. Something appears to be is amiss with the metabolism-works-like math-theory.

In my previous post, I went over how calories in and calories out do matter—just not in the way we’ve been led to believe. We’ve seen that our body is best understood using biology, not math. And as a bonus, we’ve learned how we can eat more and exercise less and help our body automatically balance calories so that we stay slim.

Still sound too good to be true? Have you ever met anybody who eats a lot, exercises a little and stays slim “automatically?” We all have. They are called naturally thin people. So the question is not, “Can our biology keep us in balance automatically?” Millions of naturally thin people have already proven that. The question is: “How can we get our body to work more like the body of a naturally thin person?” Fortunately, the most brilliant medical and scientific minds in the world have proven how we can do that. Learn how to eat right here.

We can control our weight, just not the way we’ve been taught. And thank goodness. Otherwise most of us would weigh well over 1,000 pounds by now!

Another huge thanks to Jonathan for this amazing post and info. And for those of you who hate math, aren’t you kind of excited about this? —Jenn