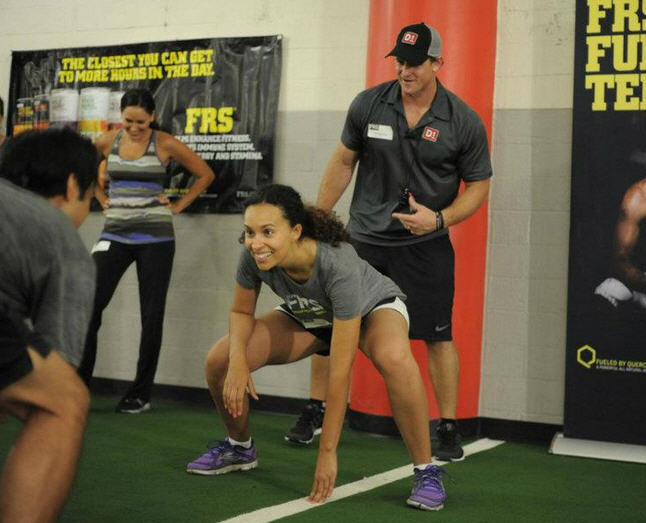 Without catching that last fitness bug, I would have never been able to make it through this workout with Tebow and Mark the Beast (AKA my fiance). Credit: Jordan Strauss/Invision for FRS/AP Images

I will always find a way to squeeze in a movie quote. Now, who knows where “slippy little sucker” came from? First one to get it is my movie twin for life. (Can you see how ADD I am about vacillating between acting and the fitness bug?!)

Back to the purpose of this post, though: catching the fitness bug! I’m definitely not one of those gals who caught the bug once and hung on consistently. Before, I would drop that fitness bug like it was a hot potato. I’ve mentioned before that my college fitness endeavors weren’t entirely good for my soul. I had some bad energy blowing bad smoke up my butt. In the past, I’ve always dropped the fit bug after these negative situations, which is why you’ll see that I’ve had to catch the fitness bug many times in my day!

First Time I Caught the Fitness Bug: The Wonder Years. I was in elementary school when I first caught the being-active bug. My best friend would gain summer weight and so her mom would push her to be more active. I was a crazy energetic kid, so I was totally gung-ho about playing. We’d swim our little hearts out in the pool, knee board, water ski; basically do anything and everything that was active and outside. We were also really big into the Barbie workout VHS tape (shout out to Jennifer Love Hewitt in that one!) and the Jane Fonda workout. These were the great years because being active was fun and effortless. This was my favorite catch.

Second Time I Caught the Fitness Bug: Bend it Like Beckham. My second catch was in the 5th grade. I decided I wanted to play soccer and found out I was pretty good. They put me on a select team, which meant serious soccer, folks. I was a beast. Practices had purpose, and I loved it. Then I broke my wrist playing with the fellas and my mom yanked me out of the game. (Fitness bug dropped.)

Third Time I Caught the Fitness Bug: Run, Forrest, Run! In high school, I joined track. Between P.E. and practice, I was a ripped, fit little beast. I would run with a friend and push to do major hills. It was great! I never tired. I miss that gusto…and that four pack! This gusto led me into my early college years where I had the issues.

Fourth Time I Caught the Fitness Bug: FBG Gets Me Back on Track. I moved to Los Angeles to pursue acting and stepped into this crazy world with such a negative perception of working out. I didn’t want to be a size zero, weight-obsessed starlet, so I didn’t work out at all. I had no clue that there was a balance to find. Then FBG came along and the love from my early years came back. I still hold on to that last bug with a willing happiness. I love that darn fitness bug! I’m a cardio/strength training girl with a passion for trying new things.

When you catch a falling star, you should put it your pocket. (Another movie quote for 100 points!) Like the other FBGs, I’ve had to rediscover my groove time and time again. Fitness and health guidelines are constantly changing, so it makes sense that my approaches would too. I’ve found Barbie and Beckham; running and realness. I appreciate every catch.

I’m loving every new thing thrown my way. At the end of the day that’s what it’s all about, right? —Tish