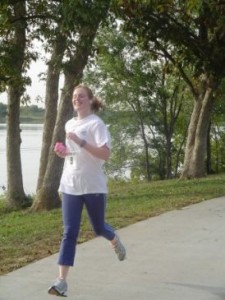 FBG Kristen came up with this QOTW and, my goodness, I love it. I think there’s a misconception that some people are just born fitness freaks who are always looking forward to a workout. Yes, there are some people like that, but for the majority of us who have made fitness a habit, it’s been a process. An evolution. And there have been many highs, lows, bumps and lessons learned along the way. It hasn’t been all rainbows and furry kittens purring and snuggling you along the way. It’s been about determination, setting goals and slowly but surely building your own confidence and trying new things to get you to the next level. (And the next level? That is super addicting to reach for!)

So with that said, I’d say that I have caught the fitness bug at five different times in my life. All of them have instrumental in getting me to where I am today—the super magical place where I don’t have to think about squeezing a workout in at all. I just do it. And go a bit batty if I don’t.

First Time I Caught the Fitness Bug: High School. I liked to play tennis and began doing a few workout DVDs and exercising by taping a couple ESPN fitness shows. Mostly though, this was to look a certain size and control my weight.

Second Time I Caught the Fitness Bug: College. Here is where I really fell in love with fitness and knew that I wanted to do something with it as my career, but again, I had issues.

Third Time I Caught the Fitness Bug: Graduate School. In graduate school and shortly thereafter, I began to really dig running. And running farther than I ever had. And feeling really accomplished and fantastic about that—as I had never really considered myself a runner before then. I remember running my first 10K—a distance I had to really train for—in Topeka (photo above). It was a small race, but I was so darn proud of myself after that. It was after that when running became something I would do at least a couple times a week. It even caused me to run my first half and then full marathon in later years!

Fourth Time I Caught the Fitness Bug: Co-founding FBG in 2008. Creating this site in 2008 took me from knowing and wanting to do it, to being a “Fit Bottomed Girl.” Not looking a certain way or being a certain size, like back in high school and college, but rather really living the FBG Life. That really, really empowered me to be truly healthy and fit for all of the right reasons.

Fifth Time I Caught the Fitness Bug: Joining the Fit Pit in 2011. Clearly the Fit Pit has taken me to the next level. I’ve gone from not being able to do a pull-up to doing four in a row. I survived a workout with 70 burpees. I’ve climbed ropes! My gym has taken me to the next fitness level, and even caused me to tweak my eats to really work for me and my goals. In a nutshell, it’s taken my catching of the fitness bug up to the next level—even getting up at 4:45 a.m. without a single complaint to make a class!

I imagine some of the other girls will have caught the fitness bugs in more dramatic or concrete ways, but, for me, it’s been a journey. Sequential, and building slowly over time. I couldn’t have started with the Fit Pit or running a 10K—I needed all of those catching-the-fitness-bug steps along the way. And I’m super excited to when I catch the next level of “fitness bug!”

Do you have a time in your life that you can point to as the time that being fit stuck for you? Or you have caught the fitness bugs in different ways over the years, too? —Jenn