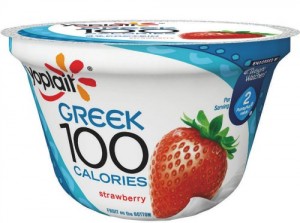 Can we all agree that Greek yogurt is a superior yogurt when it comes to nutrition? Sure, it may be thicker and richer and—in the unsweetened versions—more like sour cream than yogurt, but with about double the amount of protein of normal yogurt plus calcium and vitamin D, it’s a healthy snack that satisfies. And while Greek yogurt used to just be offered by a few companies in the organic section of your favorite grocery store (or this store), the creamy stuff has gone mainstream. Yoplait mainstream, yo! The company recently introduced Yoplait Greek 100, and we got to try it.
Yoplait Greek 100 comes in Strawberry, Black Cherry, Mixed Berry, Vanilla, Peach and Key Lime, but we just got to try it in Vanilla. And, overall, it has a nice sweet and vanilla-y taste—although it does have a bit of that sucralose aftertaste. It’s thick and creamy, but definitely tastes more like a light dessert than sour cream. With 100 calories (hence the 100 in its name) in a 5.3 -ounce single-serve cup, it’s certainly low-cal, and it’s gluten-free, too. If you do the Weight Watchers’ thing, one cup has just two points and boasts 10 to 13 grams of protein, depending on which flavor you nom on.
At $1.29 per cup, the big name of Yoplait doesn’t really deliver that much of a savings compared to some other Greek yogurt brands, but it’s certainly nice to see Greek yogurt going mainstream. Sure, I’d sacrifice more calories for real sugar and not sucralose, and I’d like a little bit cleaner ingredient list (although it’s really not that bad), but overall, if you are looking for a super low-cal Greek yogurt option that you can find pretty much anywhere, this is it.
I’ll probably stick to my original plain non-fat Greek yogurt where I add my own fruit and honey for flavor, but that’s me. What about you? What do you look for in a Greek yogurt? —Jenn