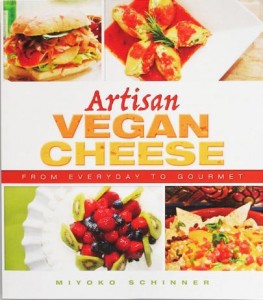 Not to be cheesy but…
Get it? Cheesy? This is a review of the cookbook Artisan Vegan Cheese? Haha!
Okay, lame jokes aside, we are about to get super cheesy. And super vegan-y. And kind of science-y. ‘Cause making vegan cheese is kind of like that. Or so I learned.
This was my first time making vegan cheese, and Artisan Vegan Cheese was a great guidebook. Filled with basic and advanced recipes to make everything from cheesecake to basic easy cheese sauce, it’s a fun way to both try out and perfect your vegan-cheese making. And for me, a vegan-cheese newbie, it kind of opened my eyes to a whole new world. Sure, I’ve eaten vegan cheese before, but making it? Well, that seemed kind of scary. But it really wasn’t. Really!
For my first endeavor into the world of vegan cheese, I went easy. Although there are many recipes that call for things like homemade rejuvelac, I went—quite honestly—for the ones that were the least time consuming and took the fewest possible trips to the grocery store. As yummy as recipes for Brie and Soft Gruyere sounded, I first went for the basic Garlic-Basil Cashew Ricotta, as I had everything I needed in my kitchen.
First things first—and a common first step with many vegan cheeses I learned—you blend some cashews with water to a creamy milk-like consistency. Then you heat it up! 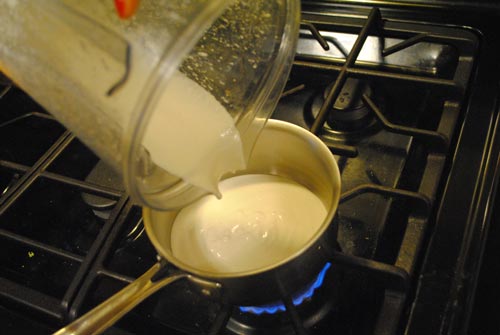 As it cooks, it thickens by quite a bit—and it happens fast. Kind of reminds me of how powdered sugar goes from a powder to a frosting all of a sudden and it’s totally mind-blowing. 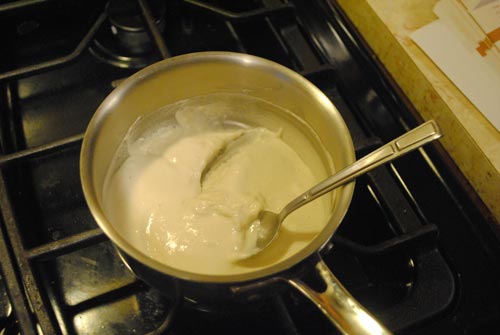 So that’s pretty much your cashew cream base. Then you take a block of firm tofu, mash it with a fork and mix in fresh basil, nutritional yeast flakes, garlic, salt and a few drops of lemon juice. 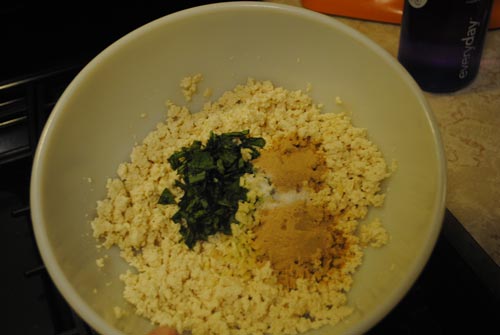 After that, all you do is mix the tasty tofu mixture with the thickened cashew cream, and you have a dang delicious herb ricotta. I imagine it’s fantastic in filled pasta dishes, but I went ahead and gussied it up as a dip with gluten-free crackers and baby carrots. 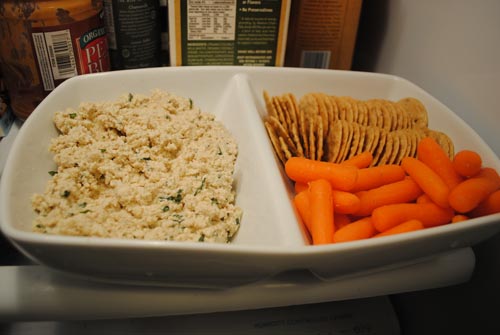 Then I took it to a party. Where I didn’t tell anyone it wasn’t dairy based. Hehe. Everyone loved it (and I eventually fessed up the next day). 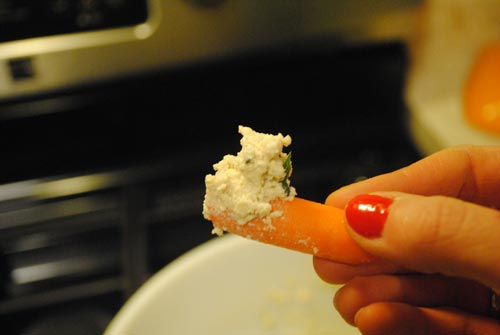 Seeing that I had success with my first go-round, I decided to tackle another cheese that wouldn’t have the help of tasty garlic and herbs. A sauce like the Easy Cheesy Sauce. Again, you start by blending water and cashews. 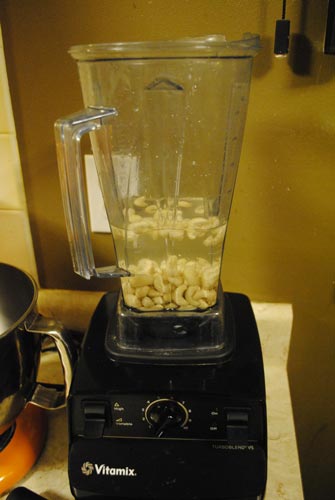 Then, for a sharper flavor, I decided to follow author Miyoko Schinner’s suggestion and let the cashew cream sit out overnight. Here’s the frothy before: 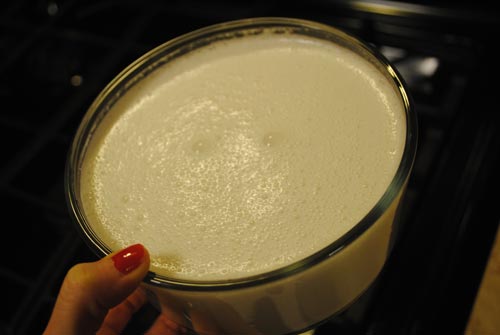 And the more separated and funkier after: 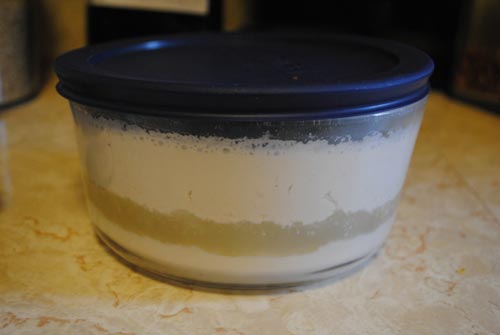 Next step: I heated the the cashew cream up in a saucepan—this time mixing in some nutritional yeast, salt, lemon juice and a teaspoon of xantham gum (which I had from my previous gluten-free cooking adventures) to give the sauce a stretchier consistency. 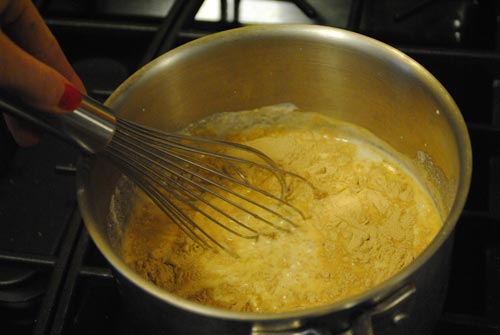 And get stretchy it did! Just like in the ricotta recipe, it took all of a few minutes to see it thicken up like a boss. 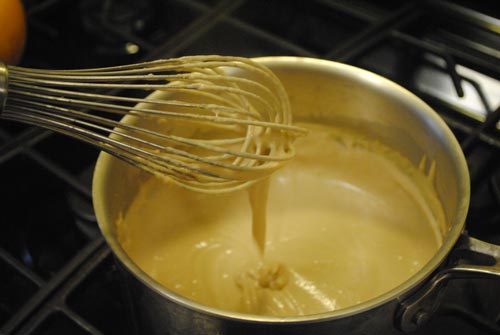 And from just one cup of cashews, I got a whole two and a half cups of the stuff! Of which I, again, tricked people into eating. (And, like before, did end up fessing up after everyone tried it.) 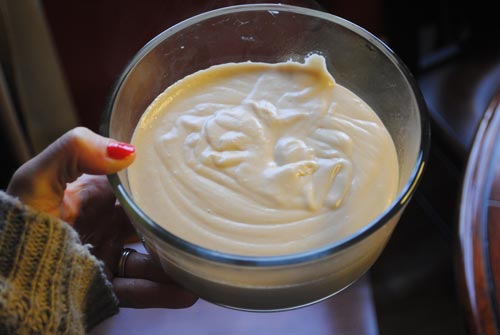 This Easy Cheesy Sauce keeps in the fridge for about four days, so I even had some of it with veggies as a snack later in the week. Hooray for vegan cheese! (And eating it with snap peas may be my fave dipping receptacle thus far.) 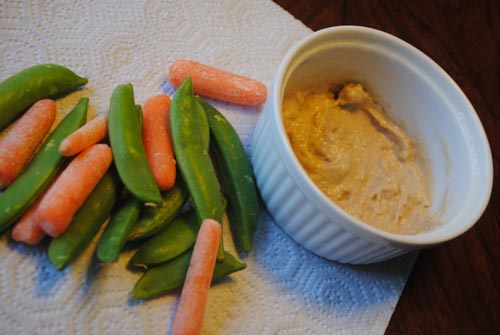 Overall, vegan cheese making was far easier than I expected. And the results weren’t nearly as weird as I expected either. Although I ended up adding more salt to both recipes than what was called for, the instructions were spot on and the flavor was good. For a cheese made of basically cashews, it’s pretty darn incredible. And I can definitely see myself making some other more complex vegan cheeses and vegan cheese dishes in the future. So, yeah, I’d call that an Artisan Vegan Cheese success!
Anyone else played around with this cookbook? Ever made vegan cheese? Which one should I try next? —Jenn