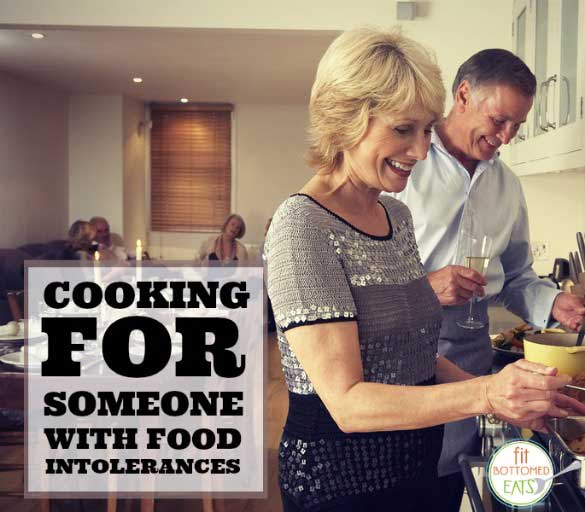 It all started when Laura and I began doing Turbo Fire. We decided that she would stay for dinner one night a week after our workout. Well, this might sound like not big deal to most people, but Laura is “special” shall we say. (Hehe—no hard feelings, Laura.) She has been diagnosed with many food intolerances in recent years and has had to completely change her outlook on food and how she eats for the rest of her life.
You might be asking yourself “why food intolerance vs. food allergy?” Well, here is a brief description of the two. According to WebMD, a food intolerance is not life-threatening and usually comes on gradually. The site also stated that a food allergy is something that usually comes on more suddenly and is much more life threatening. The other main difference of an intolerance versus an allergy is that an intolerance will bring on headaches, or in Laura’s case migraines, if you eat the wrong foods. Allergies usually bring on hives or rashes—something more sudden.
I feel a little bad for the girl because of the 30-plus intolerances she has, many of them are good-for-you foods, such as mushrooms, broccoli, pineapple, bananas, olives, almonds and coconut, just to name a few. So when you look at those items, she can’t have olive oil or almond-anything, or coconut milk or water. See my drift? Then there are some things she’s can’t tolerate that she and rest of us could live without just fine, such as aspartame, MSG and other preservatives that aren’t good to put in our bodies anyway. She also has eliminated lactose and gluten from her diet.
So, for someone like me, who loves to cook and can eat pretty much anything, this was a bit of a challenge. But one I was willing to tackle. I found that when buying groceries for the “Laura-Friendly” meals—as I began to call them—I was looking at ingredients much more closely because if something said “and other spices,” who knows what those other spices were. So Laura couldn’t have that. A lot of the ingredients had to be fresh, not packaged. For example, she can have tomatoes, but most canned tomatoes have a preservative in them that she couldn’t eat. Or, if I was seasoning the fish or shrimp, we had to use whole/single spices and herbs instead of most blends because of the questionable “added ingredients.” See how tough this was? Laura was also kind enough to supply us with some of the gluten-free ingredients she had around so that I didn’t have to buy them.
In the beginning, she was kind enough to send me recipe ideas she had collected from Pinterest. I looked through them and we used a few, but as time passed, I was able to come up with some basics we could all enjoy. 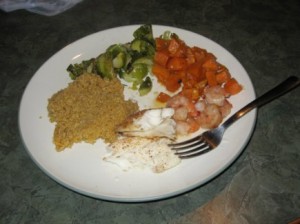 The make-up of many of our typical dinners.

Many meals included a fish or shrimp of some sort because that was meat she could eat. Because, oh yeah, she can’t have chicken either—another tough one to avoid. I made a lot of rice and potatoes, and my husband and I added quinoa to our diet. We made rice and quinoa with vegetable broth to add flavor, which I would highly recommend. It makes it much tastier.
That brings up another challenge: the broth. Laura could only have vegetable or beef broth (remember: intolerance to chicken) and they had to be a certain brand because other brands either had vegetables she couldn’t have or preservatives. After looking at the cans of Swanson broth I had in my cabinet, I began buying organic broth that doesn’t have MSG or other additives in them. 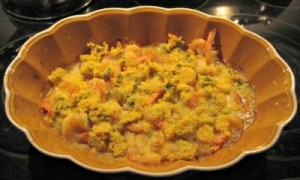 We also had lots of salads, but Laura couldn’t have most packaged dressings, so we found ourselves using lots of avocados (yum!) so that she could “create” a dressing herself. We even tried a breaded shrimp and garlic recipe with some sweet potato fries. We had an adventure with that one as we tried to make the sweet potatoes crunchy—that didn’t pan out very well. This was probably our least favorite meal. 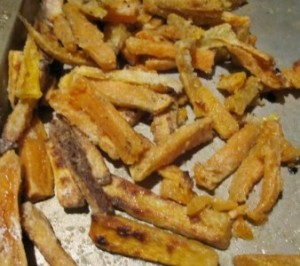 After several meals of fish, rice and veggies, we branched out and used her juicer. Well, this was an adventure in itself. We used what we thought would be enough fruit for all three of us, but were VERY wrong. None of us had juiced before, and we weren’t quite sure how many fruits and vegetables would be needed to make one glass of juice. 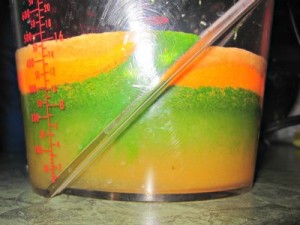 This is our two cups of juice to go around for three people.

Um, we didn’t get much out of it, as you can see in the photo. What we learned was that we need TONS of fruit and veggies if we want to have an ACTUAL glass of juice.  (FYI—my husband and I got a juicer for Christmas and will be doing juicing very soon….stay tuned.)
One of our last meals we did was gluten-free pasta and sauce. This was a little interesting because, for Laura, who can’t have olive oil, it’s hard to find a jarred sauce without it. However, Prego uses canola oil, which she can have. Who knew? We used Prego to be convenient and not have to make our own sauce, though you could certainly do that with fresh tomatoes and other ingredients. Laura also brought some gluten-free quinoa pasta. And for me and the hubs, this was a bit scary because we both LOVE our pasta. But surprisingly we liked it and would eat it again. 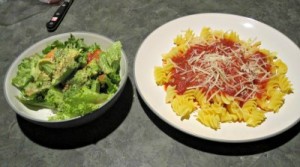 Our gluten-free pasta and sauce with a yummy salad.

Our very last meal we embarked on was gluten-free pizza—or the dough in our case. Laura found a gluten-free dough mix she could have that didn’t require eggs or olive oil. We made the dough and tried to “let it rise.” Well, it didn’t rise as much as we would have liked, but we powered through and tried to roll it out. Gluten makes things stretchy, so without it, well, you can guess how easy “rolling it out was.” Anyhow, we (as in me) piled our pizza with veggies galore and then some Italian sausage to satisfy the hubs. You can see the pictures to prove it; I go a little overboard with pizza. I like my veggies. We were able to make two pizzas from the dough. Laura put her ingredients: turkey bacon, green peppers and onion on hers. She couldn’t add cheese, which my husband can’t live without, so we added it to our mountain of pizza. 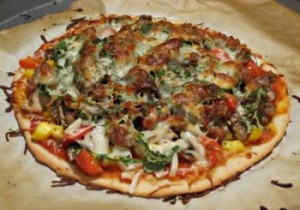 This is our gluten-free mountain o’ pizza. Mmm…tasty.

The pizza was quite delicious. I could taste the difference in the gluten-free crust—as it was more like a cracker-taste than a bread-taste, but not bad. However, I will probably stick to my whole-grain pizza dough for now.
Overall, I enjoyed the experience of trying to eat “Laura-friendly” foods. Certainly shopping for some of the ingredients made me think twice about what was really in some of our food and how to avoid the unnecessary preservatives if possible. I have found myself eating more fish and shrimp since our adventures began. Not a bad thing, right? My goal for 2013 is to see how I can live a healthier lifestyle and eat better foods. Wish me luck!
Has anyone else ever tried cooking with or for someone who has food allergies or food intolerances? What was your experience? — Kelsey
New Fitness
New Mamas
New Eats
New Zen
STAY IN THE KNOW
When new stuff happens, you'll be the first to know!
Just for You
Drop the diet for good
A variety of anti-diet coaching programs just for you.
Get free access
STAY IN THE KNOW
When new stuff happens, you'll be the first to know!
About Us
Jenn and Kristen are passionate about letting women know they're more than a number on the scale.
Get the deets
Instagram
X