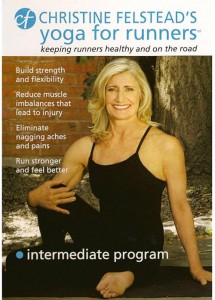 Remember back when yoga was just for yogis? Or really bendy people who liked to chant a lot? I do! Back when, if you did a lot of yoga it was kind of woo-wooey weird. But nowadays, it’s pretty awesomesauce that yoga is just kind of normal; a thing a lot of people do. AND—here comes the really cool part—people with all kinds of athletic interests see the benefit of doing it. In fact, I hear people at my gym all the time say that they “really need to do some yoga.” This, my friends, was not really happening 10 years ago. Or it was, but just not nearly as frequently. Not only is that rad because yoga is really good for the mind and body, but it’s also neat to see so many people venture into yoga as a normal, respected thing. Which is where today’s review of Christine Felstead’s Yoga for Runners Intermediate Program comes into play.

We’ve reviewed yoga-for-runners-type things before, but this is our first workout DVD review that targets yoga for runners specifically. And, despite not having a fabulous production quality, it’s pretty dang good. This 80-minute workout isn’t just a yoga routine for everyone. Although anyone can do it, it is very much specific to runners. There is a lot of info on strengthening and stretching common areas that runners struggle with—the knees, hips, low-back and core. From sun salutations to planks to pigeon to lizard (a new one for me!) and lots of hip openers, there’s stretching, but there’s also strengthening and lots of learning. And lots of holding of poses (think more power than flowing yoga).

Christine Felstead knows her stuff and she pretty much talks the entire time, correcting form here and giving tips on alignment and how to use props there. Real people (including dudes!) are in the workout DVD with her, and they’re definitely working and shaking along with you (again, this is more of a real workout than an “off day” from running). You can either do the full 80-minute workout (which is waaay longer than what I usually prefer to do at home), or there’s a menu to skip straight to specific parts of the workout, which is a nice feature. Christine recommends doing the full Yoga for Runners Intermediate Program at least once a week, but ideally a couple times a week.

A couple of cons to the DVD? The “Quick Program” is just made up of photos and names of moves; not an actual video to watch. That was kind of a letdown when I clicked on it from the main menu. Next, this is definitely a more prescription-based type of yoga than meditative. And she pretty much never stops talking, even during the final corpse pose, which seems a bit rushed. Granted, everything she’s saying is awesomely important, but I have a feeling that after a few times through, you might want to get more into the mind-body benefits by enjoying a few moments of quiet along with your yoga for runners’ specific poses. But, I guess, that’s what the mute button is for, right?

Fit Bottomed Line: If you’re a runner, Christine Felstead’s Yoga for Runners Intermediate Program is insanely beneficial and helpful. Just expect more education than zen with it—and be prepared to memorize some moves and do them on your own.


Alrighty U.S. runners, do you have any favorite yoga DVDs, routines or even poses to do? Let’s hear ’em for a random chance to win this DVD in about a week! —Jenn