Hey, ya’ll! We’ve added a new blog. Called When in Rome, it’s all about capturing our fit foodie adventures when traveling. Enjoy the exotic deliciousness! 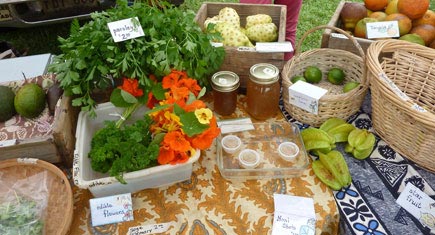 During the winter months, residents of the state of Kansas suffer through canned vegetables and temperature-controlled warehoused fruits eagerly awaiting the arrival of spring and the forthcoming farmers’ markets. Coupled with unpredictable Great Plains weather, it is just another reason to “get the hell out of Dodge” and head someplace warm.
So I did just that and took a much-deserved vacay to the land of eternal summer, Hawaii. While wheeling around the island in my rental Jeep, I came across a local farmers’ market—yippee—in February to boot. I wasn’t sure what to expect, the usual, I suppose—tomatoes, green beans and melons—all perfectly ripened in the Pacific sunshine. Upon entering my first thought was, holy moly: “Toto, I have a feeling we’re not in Kansas anymore!” 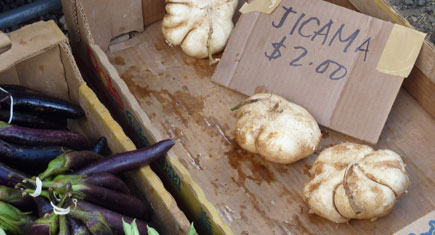 Not only was most of this stuff not readily available in the Midwest (or not nearly as fresh!), but also half of it was completely unknown to me. The apple-banana looked like the shorter, stockier cousin to the bananas back home. The taste, however, was sweeter and juicier with a hint of apple and strawberry. I was going to send a Dear John letter to my beloved Chiquita.
Moving down the row of tents, I discovered the freakishly hairy rambutans and leathery longan berries that frankly did not look edible. A friendly local schooled me—a poke of your fingernail and a twist of your hand revealed a slimy looking ball that tasted softly sweet, almost floral. Nicknamed “Dragon Eye,” they made a fun little snack reminiscent of eating grapes. 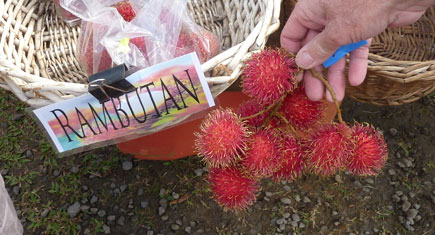 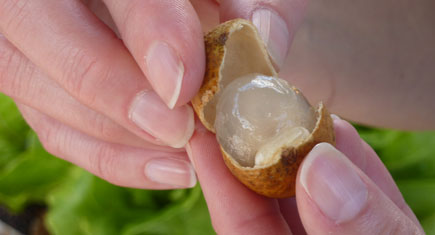 Thank goodness I came across the star fruit and the pineapple; I was starting to think I had crossed into a parallel universe! These pineapples, however, were an agricultural work of art. Named after the masters, I chose a Rembrandt over a DaVinci. A rare white pineapple grown only by a few farmers, it was extra large and sweet, with an edible core; even the natives considered it a treat. 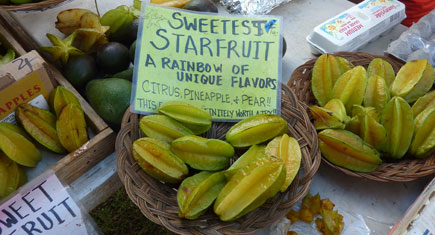 The baby greens were nothing exotic, but with the addition of an edible nasturtium, they looked so fresh and inviting that I had to purchase a bag. 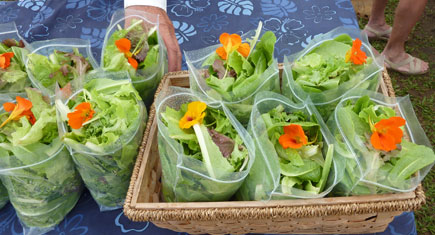 Further on, a machete-yielding woman merrily hacking away on a truckload of coconuts confronted me. In conversation, she mentioned an interesting fact: coconut water is sterile and has the same electrolytic balance as human blood. In WWII, medics used it in a pinch for a plasma transfusion! 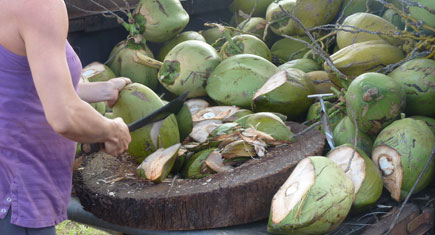 I deliberately took a pass on the unripe chico, since told that consuming one could cause mouth ulcers and difficulty breathing. Super sweet and primarily used for baking, it wasn’t much of a sacrifice to keep moving. I had circled through the market once intending to snag one of the acai smoothies on my way out. 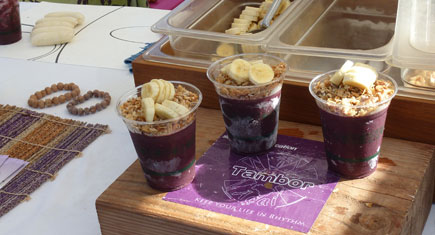 When I returned though they were GONE! I missed out on my chance to slurp down ALL the daily required essential amino acids plus 16 antioxidants in one 16-ounce cup. I settled for coconut milk instead—if you can call drinking fresh coconut milk while basking in the Hawaiian sun “settling.” 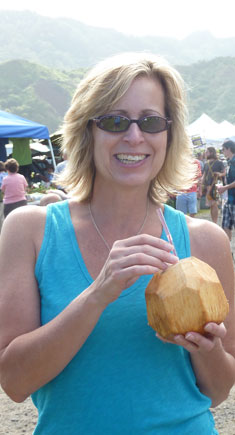 Have your taste buds been introduced to something entirely new on your travels? Ever been to a Hawaiian farmers’ market? —Karen