I already told you about cooking for my friend with food intolerances, and today I want to talk digestion and kefir! Hooray!
Many people in my family have had digestive issues—probably their whole lives—but most recently in the last few years. To help with this, at the end of 2012, my family started drinking kefir. I was a little skeptical, but after their raves about it, I was willing to give it a taste. Kefir is basically fermented milk that provides many probiotics, enzymes and nutrients to your belly. Kefir can be a good way to improve the digestive system and the immune system. It has been said that it can even help people who are lactose intolerant or even gluten intolerant. Thank goodness I’m none of those.
However, I am very susceptible to digestive issues, as I’ve had my gallbladder out and certainly can’t process some foods the way I used to. I have a hard time with rich or fried foods or junk foods—which most people would think that would be a good thing, but sometimes you just want to indulge. You talk yourself into indulging, then your body reminds you the next morning why you shouldn’t have even considered it in the first place. So I simply don’t indulge very often, as I know what it can do to my gut.
I got some kefir starter grains from my dad, who has the most digestive issues in the family, and have been taking care of them for about six weeks or so now. Here’s a tutorial on how to make your own kefir at home, but I would suggest you don’t take this on unless you really want to. It’s a bit daunting at times. Not scary, per se, but time-consuming because you have to harvest the grains every day. The grains take about 24 hours to ferment and become “kefir.”
You must keep the grains in a clean glass jar to ferment, as they won’t grow in metal, and plastic will seep into the kefir and make it taste weird. Also, I’ve been told that the grains will die if they touch metal for very long, so don’t strain them in a metal strainer either. To my knowledge, you can continue to harvest the kefir grains indefinitely—until you want to the process to slow down or stop. I will say from personal experience, the grains grow quickly, and it’s hard to keep up with sometimes. I had at one point a gallon and a half of kefir in my fridge. Yikes! 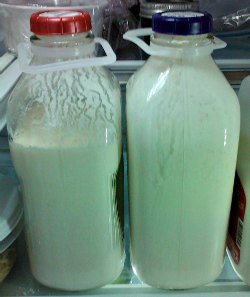 My enormous amounts of kefir in my fridge. It keeps growing.

I have enjoyed the process of drinking and harvesting kefir, but there have been a few drawbacks—albeit small ones—but nonetheless drawbacks. I figured out after consuming the stuff for a few weeks that I started to get dull headaches that seemed more like I was in a fog than anything. I consulted my dad, and he said he was having similar issues and also feeling tired and fatigued. Well, days later, I got those symptoms, too. So be cautious when diving into this experiment. You might want to ease into the process instead of jumping right in, like I did. But know that those things do pass and that your health and body can only benefit from the vitamins and minerals you are getting from the kefir.
The other drawback was that I had built up so much of kefir in my fridge that I was running out of room for it! My husband was only drinking some on the weekends, and I couldn’t keep up with it all myself. So I resorted to halting the process a little bit and putting the jars in the fridge to slow down the fermentation. That worked for a while. Then I pulled it back out of the fridge and didn’t get through it fast enough and had to halt the process again. Oh, well! Better too much kefir than no kefir! 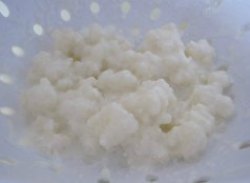 The kefir grains after they are harvested.

My hubby and I now make morning breakfast shakes with the kefir we have, adding frozen fruits to the mix, along with some flaxseed or whatever else I have to toss in. They are tasty. I haven’t yet tried the ice cream version of kefir as Jenn did on FBG, but it looks mighty tasty, and I might have to invest in some for a not-so-guilty frozen treat. Or figure out how to make my own… 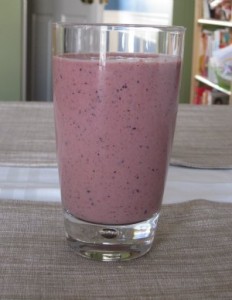 One of my many kefir shakes. Many berries and flaxseed go into this one.