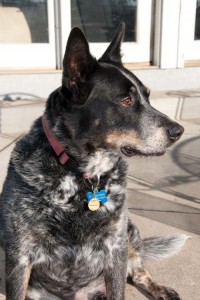 I promise that this Dingo never ate a baby. But a loaf of bread? Maybe…

Today’s post is a part of our special first-annual Fit Bottomed Pets’ Week coverage! Check out all the special posts and giveaways here.

People used to ask me how I stayed in such great shape. Sure, I put a few hours in at the gym—but everyone knew how much I loved to cook (and eat), and they figured the two just didn’t add up. They thought it was effortless. One of the genetic few blessed by the gods. Not so.

What they didn’t factor in was my secret weapon. His name was Harlow, the ultimate motivator.

I acquired Mr. H. (just one of his many nicknames) when he was three. A friend of mine who was fighting cancer had had a tracheotomy and could no longer be around his furry friend. I wasn’t ready for another dog. I had just lost one not three months earlier. However, some things are meant to be, and I was not about to tell my sick friend no.

So here I was, the proud owner of an Australian Cattle Dog. Knowing absolutely nothing of the breed, I started the Google process. What I read floored me.

The origin of the Australian Cattle Dog, often referred to as a Blue Heeler, dates back to the 1800s when some genius decided to breed Collies with native Dingoes. Yes—you read that right—the wild Dingoes that are often accused of taking babies!

These dogs were bred to work and are members of the herding group. They have an inordinate amount of stamina and endurance. Their energy level is HIGH, and they require a great deal of exercise. Cattle Dogs are very intelligent, easily bored and if not kept busy can become quite destructive.

OMG! What did I just take on?!

I was determined to make this work for my friend and for Harlow. He had already been passed around from home to home and needed to find a permanent residence. I took my job seriously. We played fetch—A LOT. I invented hide-and-seek games with dog bones. We socialized with other dogs every chance we got. He went with me everywhere. It wasn’t enough. He needed more.

Unfortunately, I was not a runner. So we started going for long walks. Before the sun came up, after the sun went down and all times in between. Winter, spring, summer and fall we walked. No weather permitting with this dog—rain or shine, sleet or snow, we just kept moving. We patrolled the ‘hood like no other. My neighbors all thought I was crazy. I didn’t care. It got to be routine and, frankly, I enjoyed it. No iPod, no iTunes, nothing. It kept him happy, and it wasn’t doing me any harm either. The walks became his panacea and my catharsis for all of life’s ups and down.

I didn’t realize how much this last part was true until he passed. Harlow died on December 3, 2012, and I would give anything to walk him again. Every step was worth it. It took me three weeks to be able to walk by myself without crying.

According to the American Pet Association approximately, 40 percent of Americans own at least one dog. Chances are, you probably have your own motivator sitting right at your feet ready to go. I guarantee you won’t regret it. The bond you form is undeniable, and you both will be better for it. So grab that leash and go.

Have you had a pet change your life for the better? Do you patrol the neighborhood rain or shine, too?  —Karen