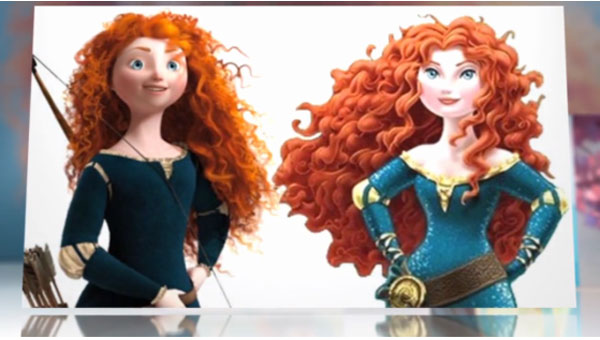 I haven’t seen the Pixar movie Brave (I’m beyond excited to take my daughter to her first movie), but I was aware of the fact that the Merida character broke the Disney Princess mold. With wild red hair and a bow and arrow, she’s said to be a kick-butt heroine. So I was disappointed recently to see that Disney had revamped her image—quite literally to make her look more vampish.

As you can see from the image, her reimagining gained her a slimmer waist, smoother yet more voluminous hair and sexier eyes. Her neckline dropped, and her signature bow and arrow had also gone missing. It appears though, that after a massive web backlash, Disney has opted to keep Merida looking how fans fell in love with her—flyaway hair and all. (There are mixed reports—some say that the modified Merida will be available on some products, so I guess time will tell which version ultimately wins out.)

I’m certainly not anti-Barbie or anything, but I do believe it’s ridiculous that a character created to be a departure from the standard Princesses get spruced up in such a way as to be unrecognizable. I have no problem with pretty-pretty princesses, but I think it’s also great when girls are exposed to the idea that beauty isn’t everything, that women can be strong and independent and totally kick-ass, and that women can be beautiful with crazy hair and a less-defined waist. I certainly know which Merida doll I’d be buying my daughter if both versions are available.

It’s just like teaching our kids that we should exercise to be strong and healthy, not that we should work out to be skinny. We can show the girls of the world that it’s okay to like playing dress-up AND sports—heck, sometimes you can even combine the two. We should encourage our daughters (and sons) to break the mold at every opportunity, not that they have to be perfect to fit in.

What do you think of the Merida makeover? —Erin