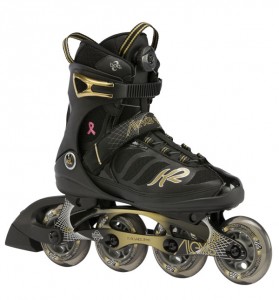 It doesn’t matter how slowly I go, I’ll still look cool in these inline skates.

I mentioned recently how much fun I had as a kid, lacing up my white roller skates, with their pink laces and wheels to ride in circles around my driveway. I also remember when I started seeing rollerblades at the skating rink—they seemed so futuristic—and I definitely remember the first time I got some myself. They were way sportier than my roller skates, and I was ready to roll.

After trying out my K2 inline skates, I’ll say that inline skates have come a long way since the 90s. I’m loosely familiar with K2 because they’re the makers of my snow skis, and they help me zoom down mountains…so could they help me get my skate on, too? Turns out that yep, they could.

I tested out the Alexis 84 BOA Skate and from the moment I took them out of the box, I was smitten. They’re black with hints of gold, sleek and they just look fast. Which was slightly terrifying considering how long it had been since I’d skated. One glance at the skate and I was reminded of ski boots—no laces, but instead what the company calls a Boa Closure System, which lets you tighten the boots as much as you need to for support.

It took me a second to figure out how the Boa system worked, but once I did it’s pretty genius. There’s basically a knob you pull out to loosen the “laces,” which are actually made of stainless steel (bad-ass, right?). Once your foot’s in the boot, you twist the knob, which makes a cool clicking noise, to tighten the laces. Thinking about it as I type, I just figured out why they call it the Boa system: The laces tighten around your feet and ankle much like a boa constrictor squeezes its prey. This system is awesome (and way less morbid than an actual snake); no more struggling with laces, trying to get them tight enough. And no more laces that are too tight in one spot and not tight enough in another. You cinch the knob down and you’re done. Then if you decide you’re not happy with the fit, you can tighten or looses as needed. A seriously awesome feature.

I’m big into foot comfort, too, and these skates didn’t disappoint. I rarely wear anything that pinches or constricts, and I prefer function and comfort over looks most of the time. These skates are awesome in that department. They’ve got great support at the ankle to make you feel steady, and the boot itself was a great fit on my foot. They just felt really great. Good cushion, but with the ability to feel like you were also connected to the wheels. They were really smooth to ride, too. Granted, I’m comparing them to my circa 1990 roller blades, but they feel really quality, smooth, stable and fast. Luckily, there’s also a good brake.

These puppies aren’t cheap at around $200, but you get what you pay for. If you’re a skater needing an upgrade, I highly recommend! They’ve got awesome options for men and for kids, so you can get the next generation on wheels too! Plus, it’s a great way to get the whole family involved in a fun activity, instead of sitting around inside.

Now that I’m back on blades, I have a feeling I’ll be doing a lot of skating this summer, channeling my inner tweenager. When’s the last time you skated? —Erin