I can bake, broil, roast, stew, steam, fry and sauté with the best of them, but put me in front of a grill and the fat lady starts a-singing. I am not talking the George Foreman here, but a bona fide beast with flames shooting out of its grated mouth—the kind that leaves you with one eyebrow for a week.
So what’s a girl to do when, after a season filled with soups, stews and hearty fare, warm weather beckons and I am once again enticed to tempt the fires of hell? I get a guy to do it. Namely Bill, my significant other. 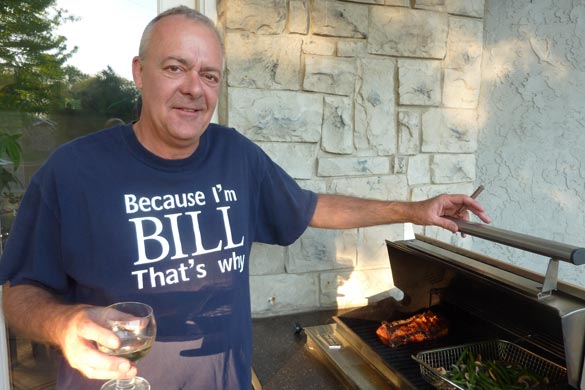 Bill is fearless when it comes to grilling. Years before we met, he began his induction into the world of outdoor cooking. Desperate for a meal that didn’t come out of the microwave, he did what many a single man has done before him—he turned toward the grill. He started out easy with beer-can chicken, moved up to pork chops and then eventually mastered lobster tails. Nothing in the animal kingdom was safe.
He didn’t stop there. While most guys would call a well-balanced meal a big hunk of meat, a slice of bread and a cold one, Bill next set out to conquer veggies. Avocados are grillable—believe it or not—and are freaking fabulous with fresh mango salsa. Hearts of romaine warm and wilted fresh off the fire will give you new admiration for that sometimes-tiresome Caesar Salad. Grill a whole eggplant until charred (this one is great since you actually get to burn it!), peel off the blackened skin, and you have the smoky scented makings for homemade baba ghanoush.
Yep, we pretty much eat like kings all summer long, and why shouldn’t we? It’s a well-known fact that grilling is one of the healthier ways to prepare food. Simply rely on good ol’ spices and smoke to boost the foods’ flavor and all that unwanted fat just drips away.
Personally, I love the grilling season. After months of slaving in the kitchen, I get to sit back and enjoy a glass of wine while he does all the work—and clean-up is a cinch to boot!
When the weather finally breaks and you get the hankering to cook outside, don’t settle on a side dish of that store-bought glop they call potato salad or a bag of chips. Go to the grill instead! This whole week we’ll be featuring some of Bill’s greatest grilled-veggie accomplishments in our “Veggie Grilling 101” series. Come back tomorrow and get the recipes—you won’t be disappointed.
Are your outdoor cooking adventures mainly carnivorous or do veggies get their day on the grill? —Karen