Weekdays are busy, busy days around here. I generally have an hour-long swim class in the morning or at lunch, and then a 4-mile group run in the evening. What, exactly, does that have to do with what I ate for a day? Lots!
Basically, on Thursdays (and Tuesdays, too, since I have pretty much the same schedule then), I really focus on fueling my body so I have plenty of energy left on that last mile. Here’s what I ate for a (Thurs)day. 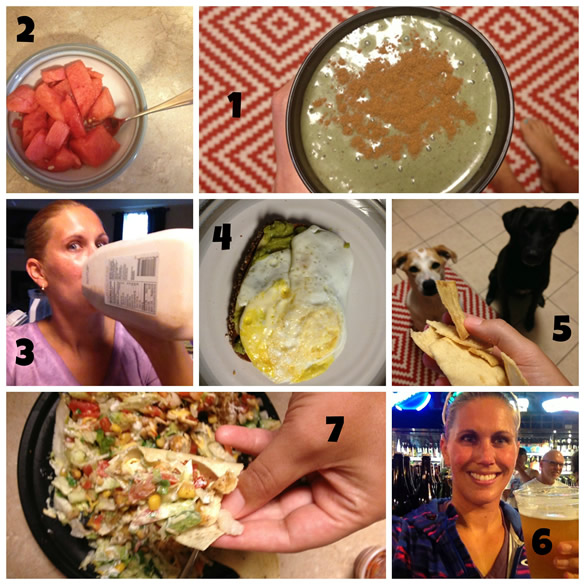 1. I started the day off with a smoothie—that’s a pretty typical breakfast for me, for sure. I opted for Greek yogurt, orange juice, frozen pineapple, frozen kale, vanilla protein powder and chia seeds. It’s cold and light and delicious, and I feel really, really smart because I made a big ol’ batch so I could have it for breakfast and have leftovers as a late afternoon pre-run snack. Genius!
2. Watermelon is my favorite thing right now. I had a bowl late in the morning, shortly before I went to swim, and I found myself making trips to the fridge throughout the day to snack on a piece or two.
3. After my swim, I grabbed the chocolate milk and took a couple of big swigs. I would be shocked if any other households without teenage boys go through as much chocolate milk as we do.
4. Oh my goodness, I know I said watermelon was my favorite thing, but is it too late to change? Because I came up with this lunch idea the other weekend while on a long bike ride, and I’m totally obsessed. I toast up some Arnold’s Health Nut bread and top it with a slice of gouda cheese, half an avocado (mashed), a sprinkle of kosher salt, maaaaybe a tiny squeeze of lime, and a fried egg. It is so good. I seriously think about it all the time.
5. Everybody loves pita chips, right? I was craving a little something salty and crunchy, and these hit the spot. The dogs were pretty excited about this choice, too.
Not Pictured: About an hour before I went to my weekly happy hour run, I downed the rest of my smoothie. I’m not sure how much of it was the nutrition and how much of it was the fact that I drank something really cold before I ran, but I had a great run after this even though the temperature was insanely hot and the humidity…well, let’s not even talk about it. Oh, Florida.
6. Beer! Happy hour run generally ends with a beer, and Ommegang Fleur de Houblon was my brew of choice that night. It’s a refreshing Belgian pale ale (made in the United States, though). It has a slightly sweet taste to it and is seriously refreshing and easy to drink. But still, I stopped at just one. (Can’t promise that’ll always be the case, though!)
7. Nothing like a naked burrito when you’re crazy hungry, you know? I swung by Moe’s and got a tofu burrito without the tortilla, which allows me to really load it up with veggies and salsa. Also? It gives me an excuse to eat it with chips. Yum.
How does this match up with what a typical, active day of eating looks like for you? —Kristen