As I mentioned last week, I’m kind of goal-less right now, and I’m okay with it. I’m working out, and I’m staying ridiculously active, so I’m letting myself off easy when I miss traditional workouts because my everyday life is filled with so much heavy lifting and movement. With summer and sunshine and feeling good has come way more activity on a daily basis. So much so that many days I get a workout simply by existing. And it’s not just running around after the kids, which is part of it. But just take a look at just a few of the things we’ve done within the last week. 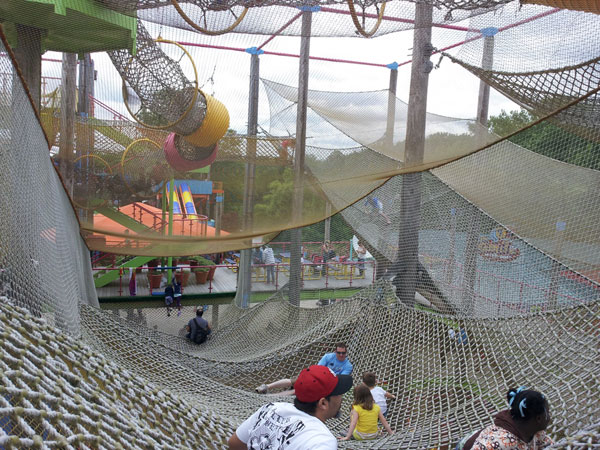 Workout idea: Carry a small child through these nets at Sesame Place.

Big Bird Balancing Act. As Tish knows, a trip to an amusement park is a killer workout when you’ve got kids in tow. Heck, it’s work when it’s just you carrying yourself through the park all day. Add strollers and kids who want to be carried, and you instantly up the workout ante. We headed to Sesame Place recently with the kids, land of Elmo and Big Bird and Zoe, oh my. And while the park is by no means huge—a good thing for many reasons—it’s still some serious work. And then you take part in the attractions that are actually a workout, and boy are you feeling it.

Take Nets ‘N’ Climbs, for example (pictured above). Three stories of nets and ropes for climbing and frolicking above ground sounds like a blast, right? And it was. Only my 35+ pound daughter decided three feet in that she wasn’t a fan. So do I turn around and climb out? No. I pick her up and scale unstable ropes with her on my hip. Yes, I am insane. Another dad suffering the same plight as I was lost his daughter’s shoe mid-climb. Did I leave the shoe behind and tell him to fend for himself? No. I balanced my daughter on my hip, ropes swaying, while I reached down to retrieve the shoe and throw it up to him on the next section of rope. It was as good as any BOSU move I’ve ever done.

Once I managed to get to the top, we had a tunnel to get through. So we crawled our way through and my daughter decided to bravely climb down about 4 feet (of like hundreds), and let me haul her the rest of the way. I saw my husband below, looking up, asking if I was having fun. Funny enough, I was. Although I wouldn’t say it was by any means easy!

Rocking It. We’re adding decorative rocks to the side of our driveway to try to combat the weeds that love to do their best impression of a jungle on the side of our house. We bought 10 bags on our first trip to Home Depot. It wasn’t nearly enough, although I thought our car was going to bottom out. So I’ve been taking the kids on errands to pick up a few more bags of rocks at a time. On one trip, we got three. On another, we got four. Loading their awkward and heavy heft into the cart and then into the van and then out of the van and then spreading them around? (And that’s not even to mention loading and unloading the kids!) I feel like I’m in a Home Depot version of CrossFit or something. 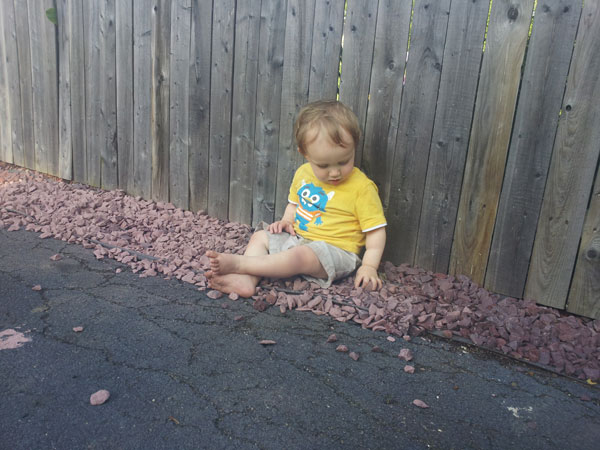 My little dude throwing rocks. I also get to put all the misplaced rocks back after the kids throw them all over the place.

Central Park Zoo. Polar bear! Sea lions! Not wanting to walk a mile to get to the stroller-accessible ramps so carrying double stroller with my husband down stairs multiple times! Some people not wanting to get in said stroller but wanting to be carried! Hills! (At least there were no nets…) So fun, so not a relaxing Father’s Day for my hubs. But our workout was complete.

Splish Splash. We go to the pool. Dude. This may be the most exhausting of all of our endeavors. Firstly, I usually skip the stroller and carry my non-walking 25-pound kiddo into the gym and out to the pool. With all of the doors to be navigated and gear-schlepping and hand-holding, it probably takes us five minutes to get to our spot at the pool. This is five minutes of holding 25 pounds with one bicep. IT BURNS. I really need to switch sides, now that I think about it. Oh, and then? I’m crazy, and I take both kids on my hips out to the deeper end and walk around. Then my buns are burning. Probably more so because I drew a chalk “track” on the driveway earlier that day, which was several minutes of low squat-walking while drawing to complete the work of art.

So seriously, if you’re not motivated to work out? Do some ridiculous landscaping in your yard. Borrow some kids for a few hours and head to the pool or park. Draw some sidewalk art while squat-walking. Or go to Sesame Place and give kids piggyback rides on the nets. (Not really. That might be creepy.) You’ll realize that you don’t always have to hit the gym to get your muscles burning!

Do you consider your heavier duty daily activities a workout? Or does it only count if you go in with that purpose? —Erin