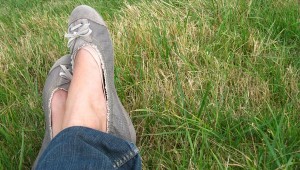 I’ve officially been “trying” to get pregnant for two years now. Two years.

That’s kind of hard to swallow. Two years is a long time — even though, in a lot of ways, it’s gone by fast. I’ve seen friends get pregnant, have kids — and then have more kids. I’ve co-written two books. I’ve commiserated with others who are dealing with infertility. I’ve launched a new site. I’ve fallen in love again with being creative in the kitchen and photography. I’ve battled demons. I’ve come more into my own. I’ve surrendered so much of what I thought my life “should” look like. I no longer take people’s pregnancies personally or feel like being invited to a baby shower is pure torture. I’ve slowly gotten back to appreciating that new life really is a miracle — and accepting that it’s not one that’s always guaranteed.

It’s all become less about me, really. Which is ironic because it took a six-month break to focus on me to get there. Or here, whatever. I remember talking with a couple of other women going through infertility treatments who had taken breaks — a couple cycles, a few months, a year or two even — from trying to get pregnant. And, at that time, hearing them say that scared me. It didn’t scare me for them; rather it scared me that maybe I’d have to do the same.

I’m sure you guys have felt it, but there’s this pressure to have children by a certain age. From your body, from society, from your family, from yourself. And when you’re approaching or — gasp! — have gone over that timeline, you freak. Or, I freaked. So the idea of a break? Um, LIKE I HAVE TIME for a break. (Too bad this study wasn’t out yet!)

But, ever the present teacher, just as I pondered the ridiculousness of a break, the universe pretty much brought me to my knees in demanding that I take one. Remember that book and new site I mentioned? Well, those happened to hit at the same time and simply required everything I had. I was writing and editing in the evenings, on weekends — and I was pouring every life lesson and everything I knew to be true in my soul into it. There simply wasn’t time for extensive doctor visits or for being rattled from having my period or worrying about my temperature. I had work to do; work that I was passionately committed to and fully aligned with. Jobs I had dreamed of fulfilling.

And it was the best freakin’ thing that could have happened to me. Time away from trying to get pregnant gave me perspective, boosted my confidence and renewed my hope. It helped me to recognize my biological clock and my own pressures that I was putting on myself and then the ability to give myself permission to not do anything. And to trust that I would know when was right to take the next step.

Now, it’s not like the voice of God has come to me and said: Thou shall reproduce now! But I feel healed in a lot of ways. I’m not confused. I know what I’m looking for in a reproductive specialist and what I will — and will not — compromise on or waffle about. And, silly as it sounds, I know that I am more than my ability to have a child. And that I will be a mother — sometime, somehow. I don’t have a concrete plan on how to get there though, and I don’t have a timeline. I’m just flowing with it and making the decisions that feel right. Even if that means not making a decision at all.

There is such an incredible amount of fear when you’re trying to get pregnant and it’s not happening. A feeling of being wronged or like you’re being punished for something. And when you’re checking this, testing that and going to the doctor all the time, it’s easy to live in that space of fear, worry and anxiety. But after my break, I’m feeling like I can go back in and we can try this whole thing again with more clarity and perspective. Less “me” involved.

So, if you’re having trouble getting pregnant and seem to be negatively consumed by it (which is almost impossible not to do), do not — I repeat DO NOT — be afraid to slow things down and take a break. Going through this process can be lonely and you can feel embarrassed and even shameful about it. But don’t. I feel like I’ve felt every emotion known to man on this journey; so I guarantee you that you’re not alone and that I — and thousands of other women — can relate to exactly what you’re feeling. Don’t be afraid to speak your truth and do what’s best for you. It may actually be just what the doctor ordered.

Have you ever taken a break from trying to get pregnant? Did it change you at all? —Jenn