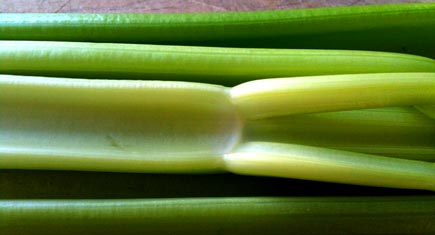 Creamy soups are my kryptonite, but so is the feeling of fat and heaviness that they leave behind.
Celery has been referred to as the “negative calorie food,” but its benefits are anything but negative. Tons of fiber, filling, high in vitamin C, it promotes a healthy immune system and the list goes on. So, why kill its pluses by adding heavy-duty cream? Sure, it’ll be delicious going down, but if you’re like me and have trouble stopping yourself before you exceed the overly full threshold, here is a recipe that will rock your world — and you won’t miss the cream one bit!
During my quest for a vegan cream of celery soup, I stumbled upon this vegan gold mine of recipes: the Irreverent Vegan. All of the recipes on this site have been absolutely delicious and very easy to make. Cream? What cream?
The recipe they call for is here, but I’ve suggested a few tweaks of my own that I thoroughly enjoyed. By the way, all of these ingredients are available at Trader Joe’s!
First, saute onion and celery in oil (I used olive oil) in a soup pot until onion is translucent. Add salt and stir. Add veggie broth and herbs and spices and bring to a boil. Add milk (I used Vanilla Flaxseed Milk from Whole Foods) and slowly stir in a bit of flour/water mixture and/or cornstarch/water mixture to the desired consistency. 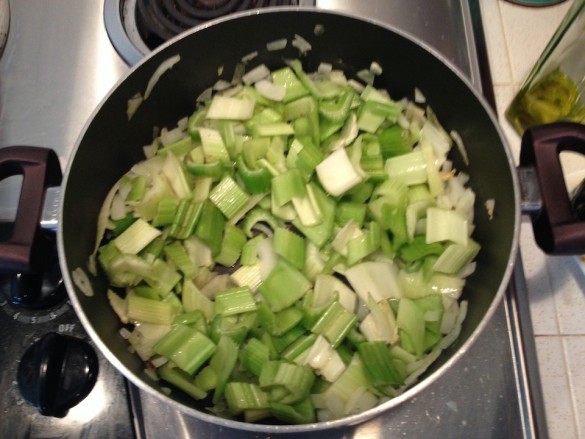 Preparation of celery and onions — on its way to greatness!

Using an immersion or standard blender, blend soup until smooth. I used my Vitamix this time around, and it took less than five seconds. I also prefer a little chunkiness, so I also blended some additional chopped celery after the rest of the mix has been pureed for texture purposes. Adjust amounts of ingredients (salt, pepper, herbs or milk) to taste. 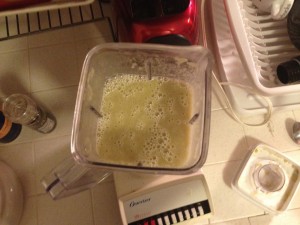 Goodness in a blender.

Put concoction back on the stove to cover and simmer for 15 minutes. 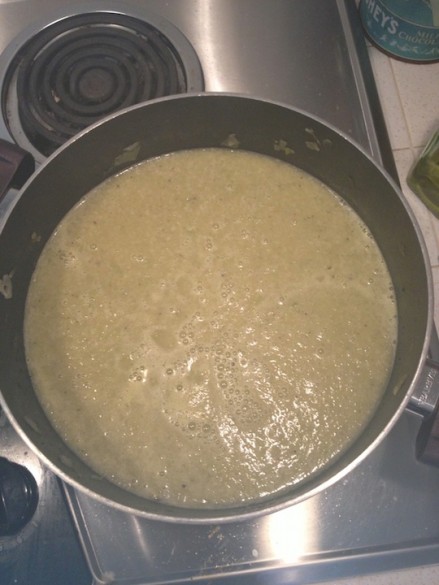 Voila! After coming out of the blender, let it simmer for a few more minutes before eating.

The recipe suggests serving with homemade toasted croutons dusted with onion and garlic powders, but I love the soup straight up and a little chunky. Usually two bowls of this bad boy plus a salad are enough to last me for a while. Exquisite!
This recipe says that it serves four with a bit leftover, but I think it’ll serve six pretty decent-sized bowls. So delicious, so nutritious!
What’s your favorite vegan recipe that has replaced the cream without sacrificing the taste?  —Crystal
New Fitness
New Mamas
New Eats
New Zen
STAY IN THE KNOW
When new stuff happens, you'll be the first to know!