In our house, my partner and I go through a lot of Honey Stinger Waffles during triathlon season. These yummy treats, based off of European stroopwafels (or syrup waffles), are tasty, just the right size for a jersey pocket, and easy to eat on the bike. We also grab them to eat in the car on the way to early morning swim workouts — they’re pretty darn delicious with a thermos of coffee.
They’re also expensive. Though “only” $1.50 apiece at our local triathlon shop, the cost starts to add up, especially during Ironman training, where Neil and I can easily go through a box of 16 Honey Stingers in less than a week. That’s over a thousand dollars a year … just for one product!
Still, we can’t quit them. Though Honey Stingers aren’t exactly a health food, they’re perfect for long days of training and racing — simple starches and sugars are easy to digest, meaning your stomach can break down the food without diverting resources from the processes moving you forward in the swim, bike and run.
Recently, I’ve been experimenting with making my own, much like I did with my homemade protein bars. For weeks, I tried different recipes to see if I can come up with one that satisfies our needs on the bike without breaking the bank. While working on this, someone asked if I could figure out a way to make the waffles gluten-free. Always up for a challenge, I did a lot of research and tweaked the recipe several times, until I found one that made me dance around my kitchen like a giggling jackass. Though I haven’t replicated Honey Stingers 100 percent, I (and my taste-testers) have been really happy with the gluten-free, 20-cents-a-waffle results!
The trick is to find a pizzelle iron, which makes small, thin waffles typically used for cannolis or ice cream cones. I got mine on sale for $10 at Bed, Bath and Beyond (in, what I am guessing is the “Beyond” section of the store?), and they are also easy to purchase online. 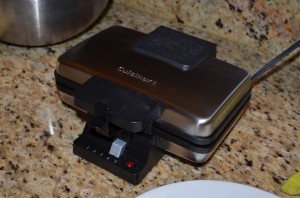 If you’re not gluten-free and you wish to make this even more affordable, you can certainly substitute regular white flour or even whole-grain flour in this recipe. For those keeping with the gluten-free recipe, it’s critical to choose a gluten-free brand that is made up of several different flours (like Bob’s Red Mill, which uses garbanzo, potato, tapioca, sorghum and fava flours).

Directions
Using an electric mixer, combine milk, yeast, 1 tablespoon sugar and 1 cup of gluten-free flour in a bowl. Set aside for 15 minutes. 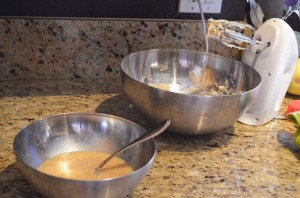 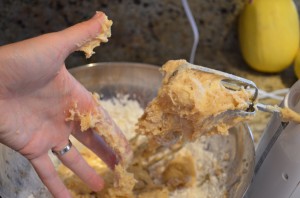 Told you it was sticky!

Once combined thoroughly, cover the bowl with a clean towel and let rise in a warm place for 1 hour (I find the top of dryer works really well!). 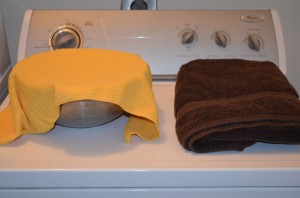 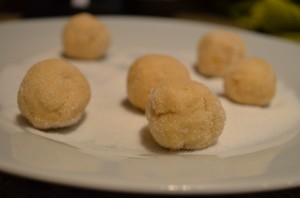 Preheat pizzelle iron. Press the dough in center of pizzelle circles and close pizzelle iron. Cook until the color is golden. After removing cooked waffle, gently clean melted sugar from the iron with a folded paper towel (being careful not to burn yourself) before cooking another. 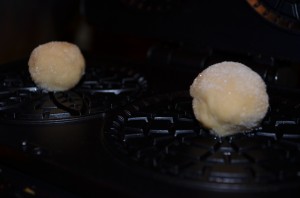 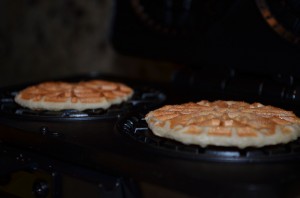 On their own, these waffles are very tasty, and the honey and melted sugar give them a sweet, caramelized flavor. However, if you’re looking for a filling to replicate the gooey nature of a Honey Stinger, you’ll need to make a sandwich out of these waffles. Believe it or not, these thin waffles are actually very easy to slice right out of the waffle iron! Use a thin, serrated knife to split the waffles in two, then fill with a light coating of honey, maple syrup or almond butter before squeezing both sides together. The filling is absorbed well by the waffles, and the crispy outside keeps it from leaking everywhere.
Have you made homemade versions of your favorite training foods? Link to your recipes below, or suggest other recipes you’d like me to attempt! —Susan
New Fitness
New Mamas
New Eats
New Zen
STAY IN THE KNOW
When new stuff happens, you'll be the first to know!