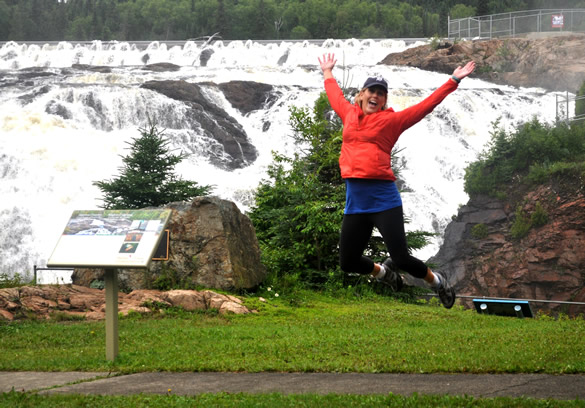 Those halcyon days of post-hike jumps for joy are long gone, I’m afraid. Ask me to do this after a current run, and I have one finger that’ll jump. Credit: Jared Seymour

I mentioned a couple of weeks ago that I had a glorious vacation that gave me a badly needed break from technology. It’s hard to really explain what that week away from my phone and computer did for my brain, but let it suffice to say that it was incredible.

But that didn’t mean I just sat around meditating and reading all day (although that, too, sounds amazing). No, we stayed quite active.

Every day involved at least two of the following:

Now, pretty much every day also involved a bigger than usual breakfast with blueberry pancakes, but it was blueberry season up there! What was I supposed to do? And we might’ve had several dinners of fried fish from the day’s catch. And, you know, I was on vacation, so while I picked up some fruits and veggies for snacking, I was also a little more lenient with the “sometimes” snack foods.

Still, I was so active each day that I truly thought I’d come home and jump right back into my workout routine. Never mind that I’d taken the week leading up to the trip a little easy due to some back pain, and, I mean, I know I didn’t run while I was in Canada, but I sure hiked a lot, and that’s basically the same thing, right? 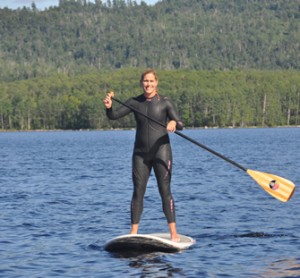 My first run after returning felt like the first run of my life. I was sucking wind within minutes. My legs felt like they were made of 500 pounds of cotton candy — simultaneously heavy and weak and soft. I did a little more than two miles and called it quits. Sweat was pouring down my nose, and I felt like I could puke. I nearly did.

Hold up. Didn’t I just run 13.1 miles? Didn’t I just complete a freaking long-course triathlon? Hell, I did the swim leg of an Olympic triathlon relay the Saturday before I left town. It’s not like I’ve been a sloth all summer, letting myself get completely out of shape. How can two miles hurt this badly?

It’s a sad truth that it takes far, far longer to get into shape than it takes to lose the level of fitness you’ve built, and one type of exercise doesn’t necessarily translate to another sport — just ask any runner trying CrossFit for the first time, or vice versa. No matter what, the first time back after a break (even a fairly short one) is rough. Really, really rough.

But it gets better.

The next day, I went out and was able to hold on for another half mile, and while it wasn’t anywhere near pleasant, I felt a lot less like I was going to die. A couple of days later, I ran a little over four miles. It wasn’t easy, and I might’ve needed an extra puff from my asthma inhaler (damn you, Florida humidity!), but I did it. And I kept doing it, and you know what? It got better.

That’s the real benefit to having years of sports and running and races under my belt. I’ve been through enough of these metaphorical hills and valleys to know that I can be at my best one month and at my worst the next, but I can always climb back up to my best. So when people tell me, “Oh, I could never run. I can’t even run a mile,” I can honestly tell them I know how they feel, and that, if they want to run, they definitely can.

Do you struggle this much when you come back to running after a short break? What tricks do you use to keep pushing forward? Is just knowing that it’ll get easier eventually enough? —Kristen