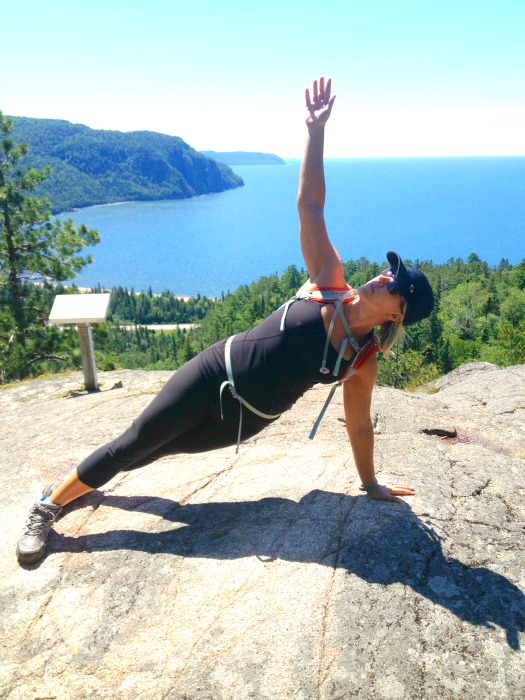 A moment of meditation on top of a mountain … captured by an iPhone. Like we do. Credit: Jared Seymour

The beauty of working as a freelancer in online media is that, as long as I get the things done that need to get done, I can be somewhat flexible with my hours. Many of the things I do outside of work end up in a column or an article somewhere — a race recap, an interview, an epiphany, you name it. And many of the things I do for work are really and truly fun — I love Tweeting and Instagramming cool fitness events, so the fact that social media is a real part of my job is a real bonus.

But, that’s the very thing that makes it hard to step away from the phone and computer and iPad and just be, you know? I find myself in a humorous situation and I wonder how I can whittle its essence down to 140 characters, or, if I can’t do that, would it make a good blog post? I think about what the best angle for a photo would be, but make sure it can be cropped into a square without losing anything! And oh, man, wouldn’t this shot really pop with the Walden filter?

I check my phone constantly, partly for work and partly for, well, I guess fun. Neurotic, obsessive fun. I have it with me always, and when possible, I have it in a pocket so I don’t have to dig for it when I feel the need to pull it out every five seconds. And while I’ll admit, I get loads of laughs and smiles from reading people’s posts and seeing their pictures and I learn at least 10 awesome new things every day from fascinating shared articles, it’s a lot for my brain to take. I know all this, but am I able to set the phone down and walk away for a weekend? Or a day? Or even a few lousy hours? OH, HELL NO. GIVE ME BACK MY PHONE.

Unless I’m forced. Which, last week, I was. I went to Canada with my husband, up to the wilderness of Wawa, Ontario, where not only did I not want to use my phone due to the international roaming charges, but I wouldn’t have even had service if I’d tried.

It was freaking glorious.

I’ll admit, I found myself reaching for it quite a bit for the first portion of the three-hour ride along the Trans-Canada Highway, but soon, I stopped looking for status updates and started looking for glimpses of Lake Superior and Inukshuk landmarks built along the sides of the road. I looked for bear and moose (no dice) and landmarks that had become familiar to me during my family’s yearly (since 1987!) summer trek up to Whitefish Lake. I wasn’t fiddling with my phone, and yet, I wasn’t bored for even a second.

By the second day, however, my phone was nothing more than a camera with music and alarm clock settings. We took them along with us on hikes and fishing, but only actually took them out when, you know, we wanted to use them. I stopped worrying about things that might be happening and focused on what was happening right there in front of me. I was, for the first time in longer than I’d like to admit, present.

Now, as soon as we crossed back over the bridge to the U.S., our phones were out, messages were being checked, and Facebook and Twitter and Instagram were being updated. But I’m making a conscious effort to spend more of my spare time reading or stretching or playing with my pets rather than checking my phone obsessively. I’m not batting 1000, but it’s an improvement, and you know what? I’ll take it.

Are you able to unplug — like, really unplug — or do you, like me, have to be forced by circumstance? —Kristen