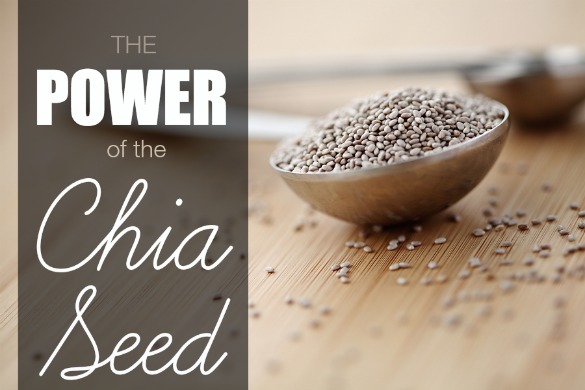 This post by Greg Walters (you might remember him from this post) about the mighty chia is a part of our fourth-annual Guest Bloggers’ Week. Check out all of the inspiring, informative, entertaining and life-changing posts here!

In 1519, Hernando Cortez led the Conquistadors in their conquest of the Aztec Empire. Most people are not aware that one of his acts of subjugation of the Aztecs was his decision to destroy their chia fields, which was a staple of the Aztec diet — second only to beans and maize (corn) — and was used in nearly everything the Aztecs ate. They would grind it to bake, they used it their religious ceremonies, and they credited the tiny seeds with mystical powers that improved life, longevity and strength. The Aztecs, who were a warrior race, had built their empire by conquering surrounding tribes until they controlled an area the size of modern-day Mexico. These warriors used chia as their main source of fuel during conquests and also used it to relieve joint pain and stimulate saliva.

Cortez believed that by destroying this important crop, a recognized staple of the Aztec culture’s strength, he could more easily control the conquered the Aztecs.

But enough about history . . . I want to share a more personal story.

Like most people reading this post, I grew up eating darn near anything that was put in front of me. Blessed with a healthy metabolism, it never bothered me much until Father Time made its inevitable presence known. On a visit to my doctor, I found that I had developed a high count in my “bad cholesterol.” For the those who don’t know, cholesterol is the stuff that gunks up our hearts and, unchecked, can lead to heart disease or worse.

My doctor suggested that he may put me on statins, which are used to block our digestive tract from absorbing cholesterol into the bloodstream, thereby keeping it from clogging up our arteries. Bad thing about statins is that they also block important nutrients form reaching the digestive system. Never a fan of putting any kind of man-made chemical into my digestive tract, I began a search for alternatives to the good doctor’s plan. So I went home, sat down in front of my computer and started researching cholesterol, statins and, hopefully, a better way to handle the problem.

First thing I learned was the best way to avoid high cholesterol is to quit eating it in the first place. It is in the meat we eat, dairy products and especially in processed foods, particularly those high in fructose and corn syrup which, unfortunately, is in most of what Americans eat. So, I changed my diet. I did not become a vegetarian but ate enough green veggies, tomatoes and, what my sister and I called a diet of “roots and tubers,” to be ridiculed by those at work who eat only dead animals in their diets.

The next step was to find something better than statins to solve the high-cholesterol problem. The best I could find was to consume foods high in omega 3. I like to eat fish, which is high in omega 3s, but I live in the middle of farm country in the Midwest, so it is not practical to chow down on fish at every meal. But there are plenty of health food stores who sell “fish oil” pills highly loaded with omega 3, so I began a regimen of fish oil pills twice a day.

Six months later, my blood tests came back with positive improvement. My cholesterol was down but still higher than it should have been. I was determined to continue with the same program of roots and tubers, omega 3s and staying active.

On a vacation trip to Lake Tahoe, I met another doctor and his wife. I noticed that at breakfast she would sprinkle some sort of powder onto her cereal and in the evening, I saw her do the same with her salads. I did not give it much thought, and, since we did not see much of each other during the day, I never brought it up. As I was leaving the B&B we were staying at, she came up to me and made a point of saying that she could see I took good care of myself. She suggested that I should try adding chia to my diet. She handed me a couple of small packages of the seeds and told me to try them. When I returned home I read up on the “mighty” chia.

The first thing that caught my attention was that the chia is extremely high in omega 3s. One thing that had always bothered me about fish oil is that you really do not know where it came from. I mean, does it glow at night because the fish it came from frequented the Sea of Japan? Was it made of material scraped off the floor of some dirty fish processing place in Russia? Chia seeds come from chia plants ( the proper name being Salvia hispanica). Because it is plant-based, there is not as much of a question of the purity of what you are eating.

Chia seeds, which are extremely high in omega 3s, are 20 percent protein and are a natural source of fiber, iron, calcium, niacin, magnesium, zinc and phosphorus. They are a natural anti-inflammatory, contain more anti-oxidants than blueberries and are clinically proven to lower blood pressure. But what really sold me on chia was that six months later, after faithfully adding two tablespoons of ground up chia seeds to my coffee or tea every morning, my blood tests came back with an even lower cholesterol count than before. In fact, my cholesterol count dropped well into the “normal” level. Another benefit that I did not expect, but am glad I found, is that chia is fantastic for the digestive system. Can’t be very graphic here, but to paraphrase my friend from Lake Tahoe: try it, and you will be amazed at the result. More plainly stated, add this tiny seed to your diet and you just might lose weight.

So there you have my chia story. Give this tiny seed a try and you will not regret it. —Greg Walters