Now that my Tough Mudder is behind me, I’ve gotta look forward to my next goal. Will it be another obstacle-course run? Will it be a much shorter fun run? Will I take up swimming to put running behind me altogether for awhile? Whether it’s another running goal or not, one thing is for sure: there are an insane amount of fun runs and themed events you can do should you please. Want to run in your undies? There’s a race for that. Want to be chased by zombies? Sign right up. Need something way hard core? Go Spartan.

From beginner to super-advanced athlete, runs aren’t just about running any more. Check out these 16 crazy races that are sure to spice up any running boredom you’re experiencing. 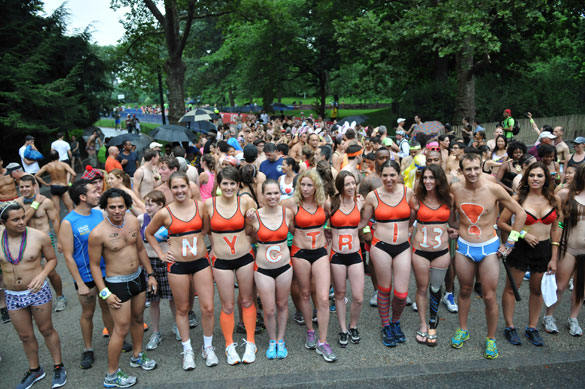 Yep, you can run races in your underwear … or less!

Ever thought to run in your skivvies? Here’s your chance! Yep, at the Freshpair Underwear Run, runners really do run in their underwear! This 1.7-mile fun run takes place in NYC’s Central Park every year on the Friday before the New York City Triathlon. Next year’s race will be in August, so you’ve got plenty of time to prepare to bare. If you miss out on that opportunity, there is also the Underwear Affair, which is a Canadian run that benefits cancers below the waist.

Best for: The showoff who loves short distances!

Keep reading for 15 more races for serious runners and fun runners alike! One thing’s for sure…I won’t be dropping my drawers any time soon. Maybe a Disney half would be a better option! —Erin