This little beauty arrived on our FBE doorstep a few months ago. Seriously, is this not the prettiest box ever? 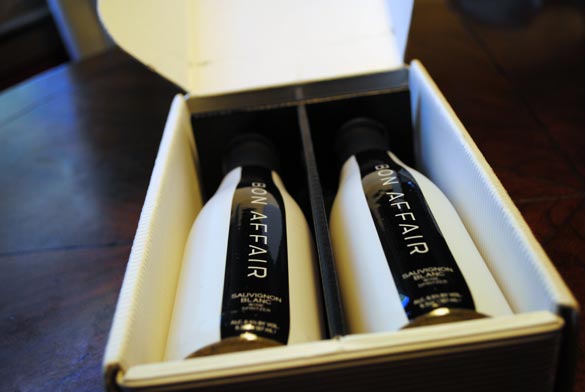 And that’s a pretty classy and sexy bottle. (Especially if you pronounce the name like this dude’s.) 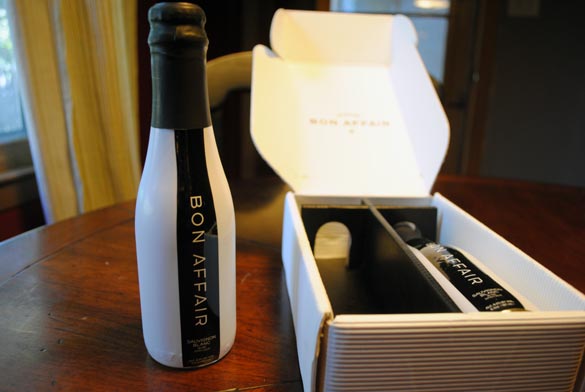 But what is Bon Affair?! 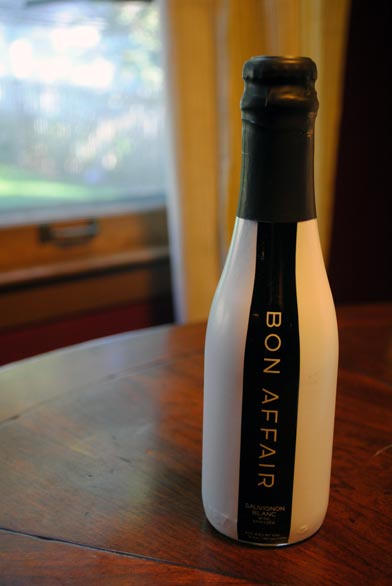 Wine! Or, more accurately, a new wine spritzer with half the calories of regular vino, electrolytes (hydration, what, what) and no added sugar. In fact, one of these 187-millileter bottles has just 70 calories. Yeah, that got our attention, too. (And can we give an AMEN for an alcohol actually having a nutrition facts and ingredients label?) 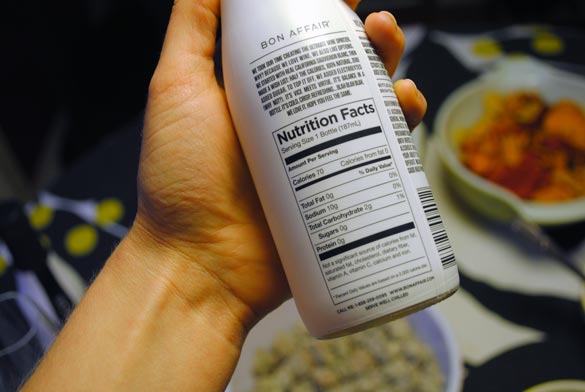 Made with California wine, carbonated water and grape seed extract, a bottle has an alcohol level of 6.5 percent, which is just a touch more than beer but less than wine. Bon Affair also makes a Syrah Wine Spritzer, but we were just sent the Sauvingon Blanc. (Hey, maybe next time.)

Bon Affair says this wine spritzer is good for any ol’ activity, but I wanted to try it for something a little special. Something like The Biggest Loser season premiere. And to that end, I invited a couple of fellow Bob-lovers over, set out some healthy snacks (TJ’s popcorn, gluten-free Muddy Buddies made with protein powder, veggie chips, baby carrots, guacamole and salsa) and popped the cork. 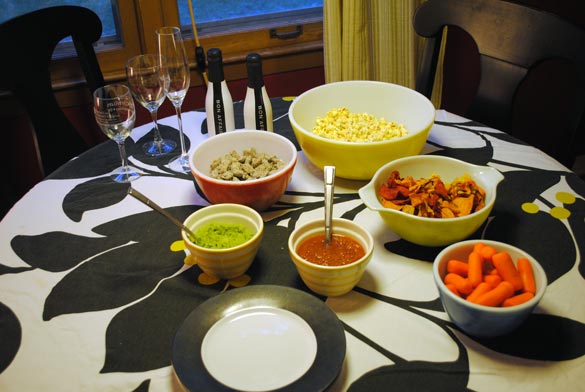 Or, wait, there was no cork! 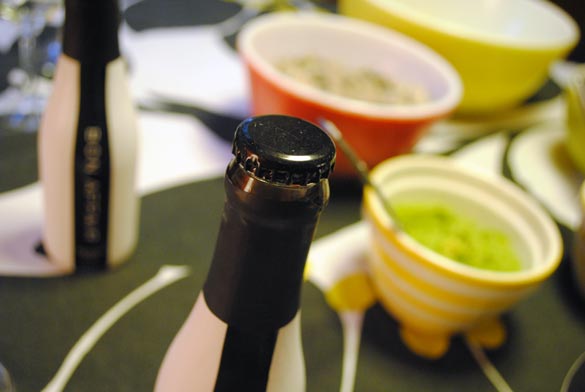 So I busted out my beer bottle opener, and then it was on. 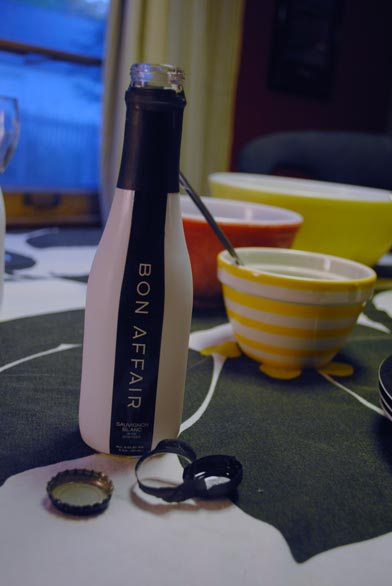 Bubbly and festive, it looked just like a champagne. 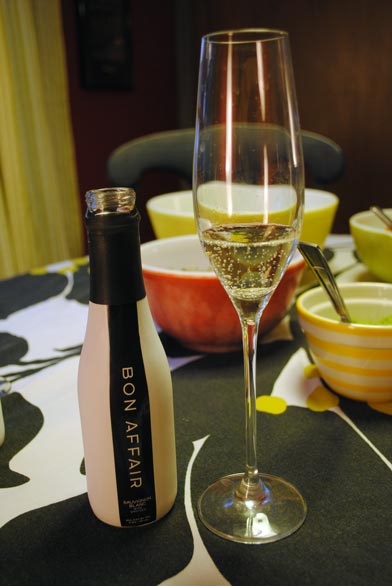 Light and dry, it tasted very refreshing and not sweet at all. In fact, the Bon Affair Sauvingnon Blanc Wine Spritzer kind of reminded me of watered-down citrus Clearly Canadian (remember that from back in the day?), with a little wine mixed in. The bubbles were fun though, and sure made the premiere feel more festive. And, for 70 calories you really do get quite a bit to drink, which is nice — even if it does taste a little watered down. 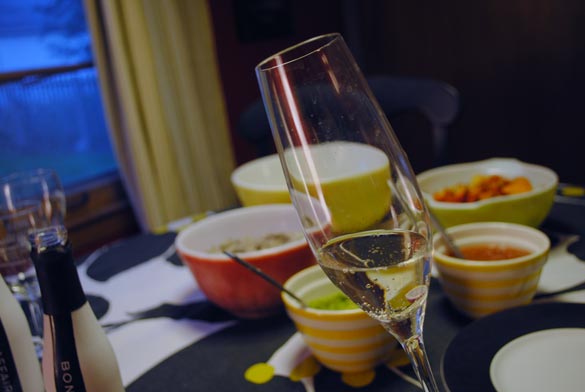 A couple of nights later, I decided to take Bon Affair up on its proclamation that it’s good anywhere. That’s right, I sneaked a glass bottle (rule breaker!) into my husband’s kickball game. 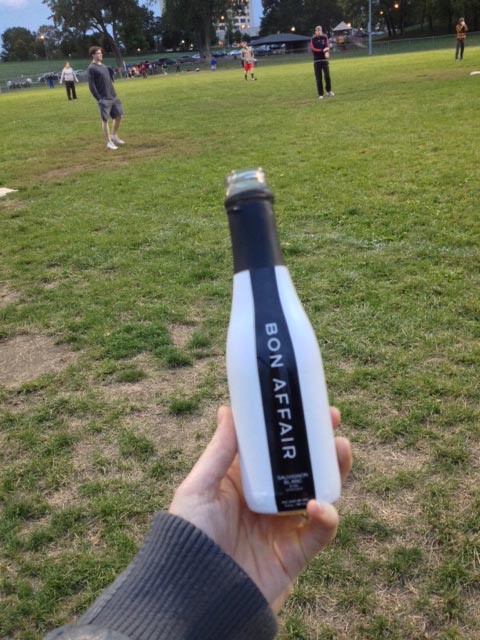 And while they may not have won the game, I won with my drink du jour. When you really embrace the drink for what it is — low-calorie watered-down bubbly wine (hooray for hydration when drinking!) — you can definitely enjoy it more. While I certainly won’t stop drinking champagne and regular wine, this is a fun light twist. And it’s a nice way to drink less alcohol (and ingest fewer calories) while still being social with something in your hand. Plus, when you take that bottle in public, everyone wants to know … what is that? And, thus, it’s also a good conversation starter. (Just don’t get caught taking glass into a park — they tend to frown upon that.)
From the looks of the Bon Affair online store, the little mini bottles I tried aren’t sold, which is a total bummer because they’re super cute and very appropriately portion-controlled. But, the good news is that you can get a whole bottle for less than $15 to split with your buds. Cheers to that!
This isn’t the first time we’ve reviewed “light” liquor — tell us, do you like lower-calorie versions of alcoholic drinks or prefer to just have less of the real deal? —Jenn