Remember when I worked out with Jillian Michaels last year at Sweat AC in Atlantic City? Well, I headed down again this year to the sweat-filled event, and I again signed up for more Jillian torture. If you’re in the Northeast, mark your calendars for September so you can hit this event next year. If you’re in Florida, you can get in on the fun in Miami, Oct. 11-13. There’s a range of prices for the events, but it’s a fun way to take classes with huge names in training (like Jillian and Shaun T) that you’d be unable to do otherwise.

I was once again reminded of why The Biggest Loser contestants shed so many pounds. Jillian workouts seriously put you through the paces. 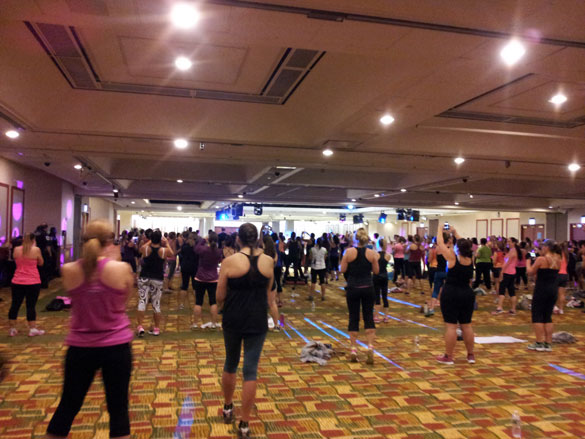 So well-rested, so unsuspecting.

Seriously, Jillian is like a chihuahua — small but bossy. And you’re kind of afraid of her even though you’re the bigger one. 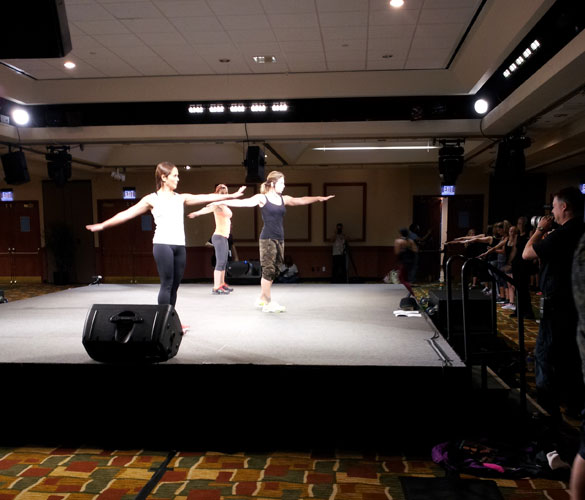 Jillian Michaels, making sure we all have enough room for torture.

After Jillian realized that the workout she’d planned for us wasn’t possible because we didn’t have weights, she literally said “F@ck it” and decided to freestyle the workout. That struck a deep fear in me, because who knew what she’d pull out of her sports bra for us? Like her boot camp last year, it was a lot of moves and not a lot of not resting, ever. I may have blacked out because I can’t for the life of me remember half of what we did, but I know that my buns were super sore. Squats, lunges, oblique planks, tricep dips, crab kicks. Toward the end, this song played, and I was like, seriously, just wake me up when it’s all over. I just kept thinking, “This is good training for the Tough Mudder. This is good training for the Tough Mudder.” And I survived it, very sweaty and very, very glad it was only 30 minutes.

After that, I went out with some of the other media and PR people for dinner. They tried to talk me into going out, but after a couple of margaritas (woot!) at dinner, I knew that if I wanted to hit a morning workout with Insanity’s Shaun T — and survive — I had to hit the hay. If anything, I was shaking in my boots even more for Shaun T because a) I’d never done Insanity, and b) I was already tired and a little sore from Jillian the day before. And the Insanity workout was to be more along the lines of an hour, not 30 minutes. GULP. Again, I was repeating the mantra, “This is good training for the Tough Mudder. This is good training for the Tough Mudder.” 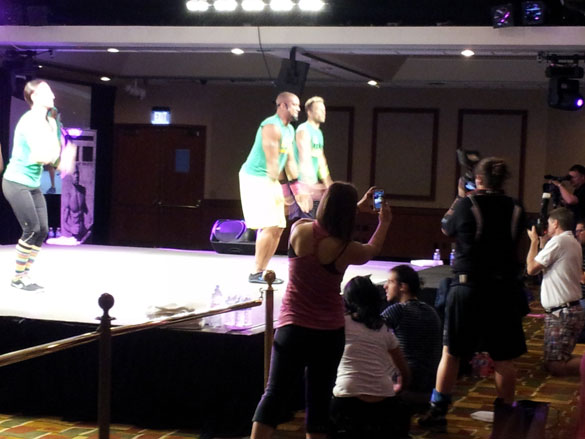 Shaun T in the house!

Shaun T put us through a good 45 minutes or so of seriously tough stuff. He tells you to dig deep, but he also tells you not to be an idiot and to pace yourself (I’m paraphrasing). To that end, he had a modifier on stage, and I had no shame in modifying some of the moves to survive it all. There were high-knee jumps, fast shuffles, mountain climbers, forward kicks — seriously anything mildly boot camp was thrown in. And dear goodness, the push-ups. There were all sorts of sets of push-ups. Several sets of four. Several sets of eight. Several sets of 16. Enough with the push-ups, Shaun T(orture)! He kept telling us we were almost there, but who knows where “there” was because it seemed like we were never done. Luckily, we did get some breaks (maybe that was the “there”) because we definitely needed them! By the time we got to working on our core on the floor, my ab muscles were already quivering because of his emphasis the entire time on tightening the core.

I survived it all, a totally sweaty mess, and he pulled the entire group up front for a pow-pow. And, dude, it’s a serious testament to how much Shaun T rocks that you want to give him a massive bear hug after he puts you through his workout. He was so inspirational and encouraging, and you can tell he truly loves what he does. Even with my limbs shaking, I left there feeling like I was walking on air. If I ever get a chance to get insane again, I’ll jump at it, because Shaun T is pretty freaking Terrific.


If you ever get a chance to work out with a fitness big wig, take advantage! It’s so inspiring to see their passion for fitness, and you can only leave wanting to improve yourself and your fitness. And maybe take a really nice shower.

Have you ever worked out with one of your fitness idols? Who would you love to take a class with if you could? —Erin