My body has been on a bit of a roller coaster this year. In early January, just as I was really beginning to buckle down on my training for the Leadman Tri, I started another round of TMJ pain, which forced me back to a diet of smoothies, soup and yogurt, for the most part. The good thing was that these limitations got me to really focus on my nutrition — my meals were thoughtfully prepared to make sure I was getting enough good stuff to keep me training.
The bad thing was, well, I couldn’t eat anything that required chewing. ‘Nuff said.
Not surprisingly, between the restricted diet and putting in 12 or more hours a week of swimming, biking, running, yoga and strength training, I lost a good bit of weight and got nice and lean. For literally the first time in my life, I lost weight without focusing on it at all. In fact, I was more concerned with getting enough calories to sustain my activities than I was with cutting out the junk.
But then I finished my big race, and my jaw got a little better and suddenly, I could eat what I wanted (and it’s hard, at that point, to not want to eat ALL THE THINGS because, for so many months, I couldn’t). I didn’t have to focus on training quite so hard. And those extra pounds that had vanished as if by magic? They’re all back. Every last one.
While the weight is a bummer, it’s really just a symptom that I’m not eating as well as I was, and for the last month or two, I’ve been trying to find a way to get back in that clean-eating mindset without the restrictions I faced in the spring. And that’s when The SimplyRaw Kitchen cookbook opened up its pages to me and the angels began to sing and I started seeing my meals in a new light. 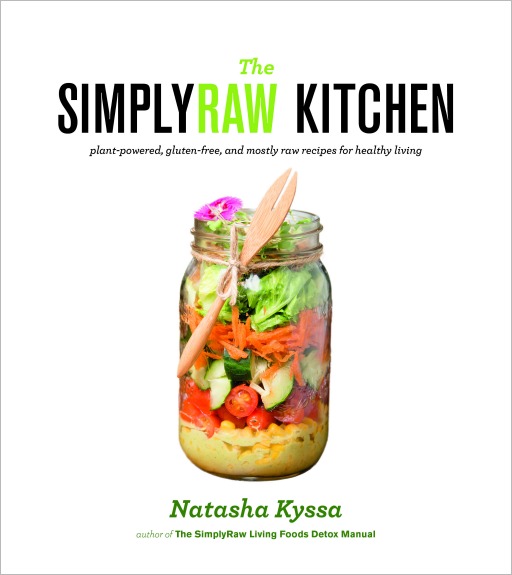 As you probably guessed, the cookbook, by Natasha Kyssa (author of The SimplyRaw Living Foods Detox Manual and founder of SimplyRaw — you can see her TEDx Talk: Let Food Be Thy Medicine, here), focuses on raw, vegan foods. But it’s not just a book of recipes, and it’s not filled with preachy statement designed to guilt you into eating nothing but raw, vegan meals you made from scratch. She even says that the process of making that full transition can take years, and adding a few of these meals into your diet is better than none at all.
The first 22 pages talk about the benefits of eating these whole, natural, unprocessed foods, and include tips for incorporating those foods into your life. I’m talking real, easy-to-follow tips, like planning a smoothie and a salad as meals (both of which are very easy to make, raw and vegan), and then slowly working your way up to more whole, unprocessed meals.
The next 25 pages discuss kitchen essentials for a plant-based diet, which not only explains why raw, organic and locally grown foods are particularly beneficial, but also includes a long list of staple ingredients (and their health benefits) as well as tools. Even better — she offers tricks for using tools you probably already have on hand and techniques for making the most of the ingredients and tools you have.
You guys, this is basically a college course in nutrition and kitchen skills that you can read in the course of an afternoon.
Once I finally got to the recipes, I was bursting with enthusiasm. I was pumped. I was primed. I was ready to make some changes. I was ready to, well, I guess not cook since most of the recipes (although not all) are raw, but, make food. Real food!
There are a bunch of sections: Beverages, Breakfasts, Soups, Salads/Salad Dressings, Pates/Dips/Spreads/Cheezes, Mains, and Desserts and Sweet Treats. I decided to start with what I knew best: Smoothies. The My Thai Smoothie was listed as a SimplyRaw Express Restaurant favorite, and I had all the ingredients, so it was an easy call. A delicious one, too — who knew cucumber, cilantro and mango could be so unexpectedly flavorful? Shoot, if all raw vegan meals are this simple, I’m in! 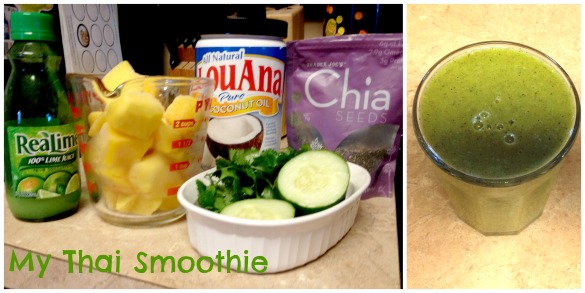 From there, it only made sense to move on to a main course that I could share with my husband. You know, my husband who is very much not vegetarian, let alone vegan (although, I give him loads of credit — he’s started eating far more vegetarian meals than I think he ever thought he would). I chose the Cauliflower Chowder, partly because we both like cauliflower, partly because it’s fall and therefore soup season, and partly because this was one of the non-raw recipes, which I thought might go over a bit better. 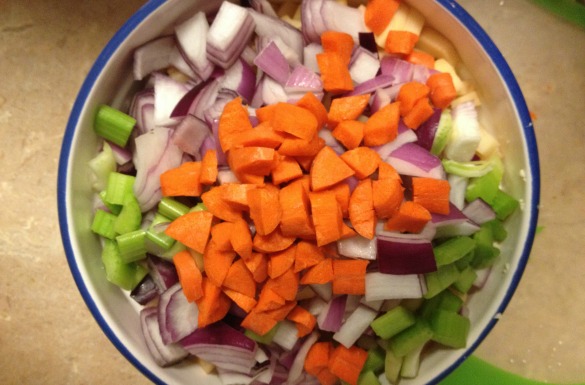 I almost needed another bowl to hold my chopped veggies. And that’s my big bowl.

It’s a reasonably time-consuming dish — there are loads of veggies to chop, then boil in water, blend into a puree, then heat some more with spices — but it immediately became a staple in our house. It’s filling (like, we made pasta with roasted veggies on the side in case we were still hungry, but neither of us ate much of that), makes a lot (hooray, leftovers!), and packs in so, so, so much nutritional goodness. 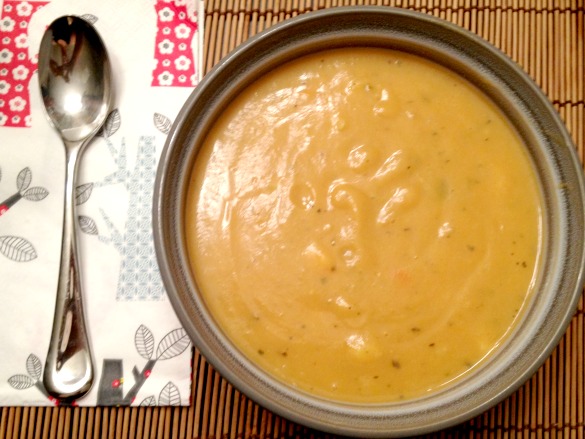 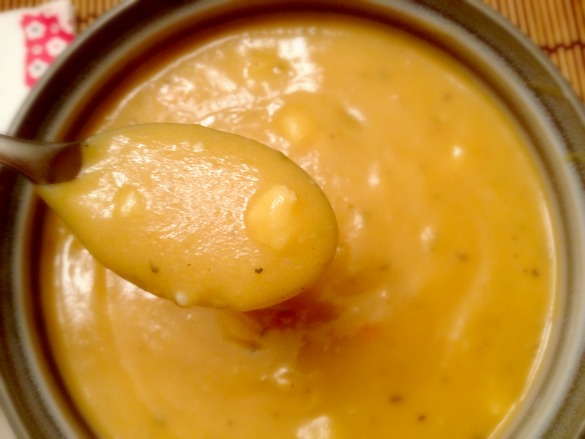 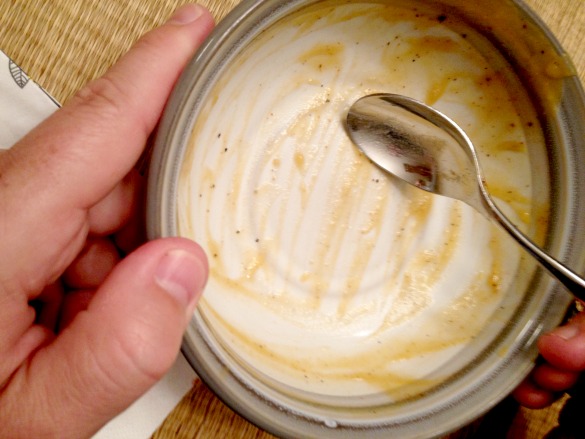 Guys? That’s not even mine. That’s Jared’s soup bowl. I almost had to fight him off of mine.

You think I’m joking? A few days after making (and eating) this batch, I invited friends over for dinner and made another, adding in a few new veggies and spices to mix it up. (They loved it, and one of them didn’t even like cauliflower.) And when this batch is gone? I’M MAKING IT AGAIN. JUST TRY AND STOP ME.
Honestly, when I said I’d give this a review, I thought it would be cool to learn a few new recipes, maybe pick up a vegan tip or two. I had no idea I would develop a newfound love of meal prep and even more whole, unprocessed foods than I did before. It’s one thing to have a couple of recipes like this available when you have vegan friends over for dinner; it’s a whole other thing to realize this is how you want to eat yourself.
I still don’t plan on going wholly vegan or focusing strictly on raw foods at this point, but this cookbook came at just the right time for me to start making some mindful changes to my diet. And I couldn’t be more excited about that.
The only thing I would change? I would love to have nutritional info for the included recipes. Sure, I can plug it all in and figure it out, but I’d rather spend my time and energy chopping veggies, you know?
Has a cookbook ever given you more than just recipes? Has one ever changed the way you eat? —Kristen
New Fitness
New Mamas
New Eats
New Zen
STAY IN THE KNOW
When new stuff happens, you'll be the first to know!
Just for You
Drop the diet for good
A variety of anti-diet coaching programs just for you.
Get free access
STAY IN THE KNOW
When new stuff happens, you'll be the first to know!
About Us
Jenn and Kristen are passionate about letting women know they're more than a number on the scale.
Get the deets
Instagram
No images found!
Try some other hashtag or username
X